Things That Happened In April and May 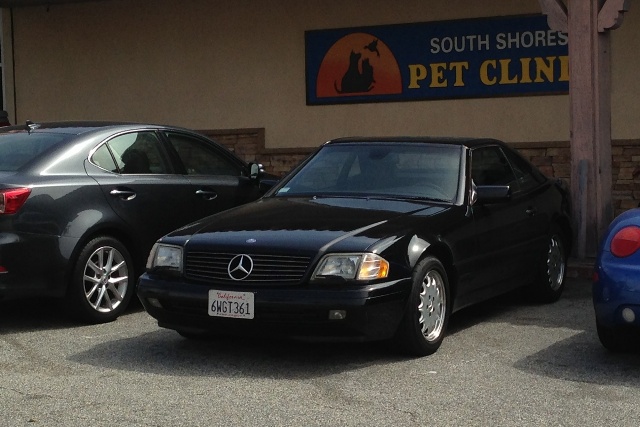 It's a well-known fact, Benzitos, that I basically didn't post anything during April or May.

But imma make it up to you: got 30 photos here from those pre-topless months, in chronological order, that are guaranteed to bring you mostly up to date.

Don't worry, you get my running commentary, too. So, the lead photo: I took it in a San Pedro parking lot prior to having lunch with a former colleague, and I did so because the 500 Benz was looking particularly crisp and correct that morning. We took the Benz to lunch, by the way, and said colleague remarked: "You paid how much for this? I should get one for my son!" I'm not sure I'd go that far, but I can see where he's coming from. 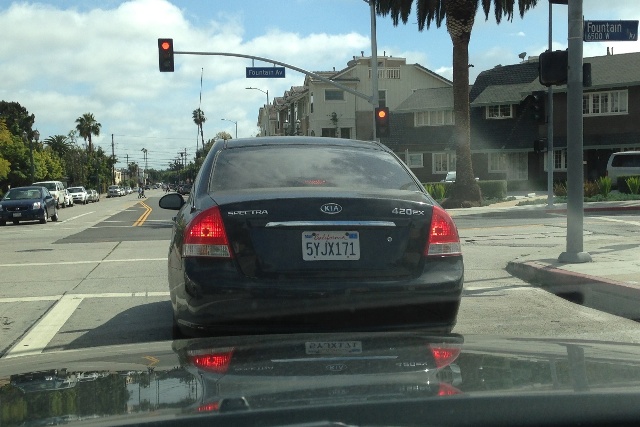 A rare Kia Spectra 420EX, spotted in the wilds of Hollywood. Either the owner procured the "420" part from an old V8-powered Mercedes, or s/he wanted to pay vehicular homage to LA's favorite semi-legal medicine. Possibly both. 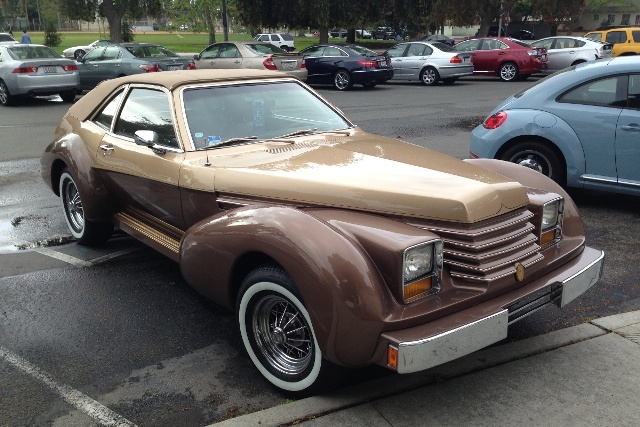 On this particular morning, a few friends had prevailed on me to play an early nine at Penmar, a.k.a. the worst golf course I've experienced in LA. My first-ever Armaretta sighting made it all worthwhile. 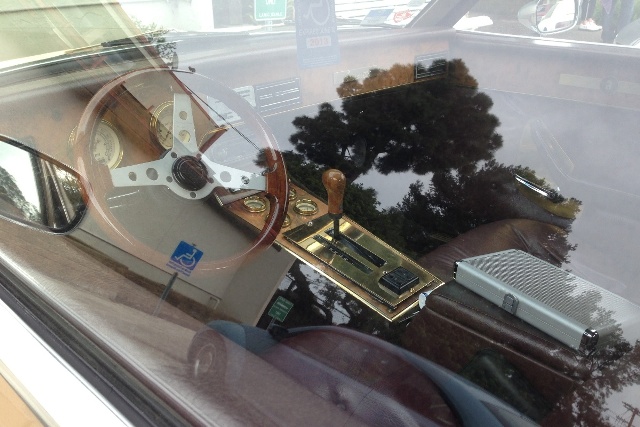 About 30—yes, 30—of these contraptions were built, reportedly, and they sold for a cool $49,995 back in the mid-'80s. The car seems to be an unholy mashup of a Chevelle and a Cavalier, though with an indubitably unique interior. It kind of reminds me of the Dumb and Dumber dog van. You can attempt to learn more about it here. 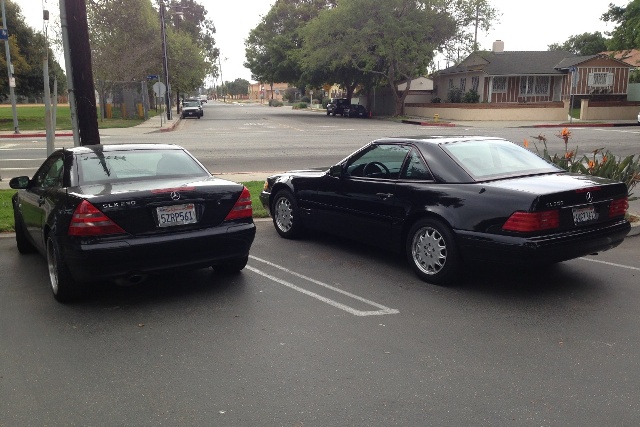 After the round, I returned to the Benz to find a contemporaneous SLK230 parked beside it, which gave me occasion to reflect on how dorky that SLK looks with its stubby body and enormous taillights. 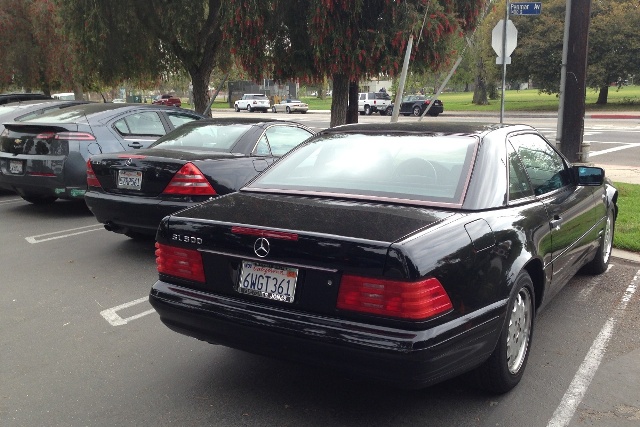 Plus, it lacks the traditional thick and angular C-pillar (modeled nicely here by the 500 Benz), maybe because you can't have that with a retractable hardtop. In any case, the first-gen SLK marks a chapter in Mercedes roadster history that I'm guessing the company would prefer to forget.

I confess that I badly want a second-gen SLK55 AMG, however, roundy styling and all. 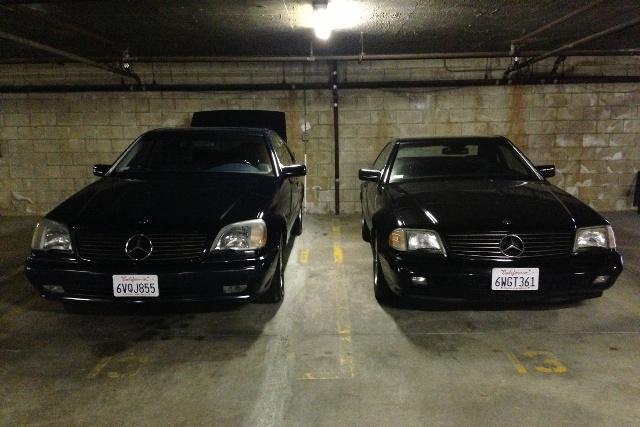 Hey, let's play some more golf. Destination Rancho San Marcos this time, a course just north of Santa Barbara that I've referred to before as "golf heaven." mercedesmark's trunk is open because we're taking his 1999 CL500, which clearly wins in the golf-car category. What would a dictator drive to the golf course, right? That's the rubric here. 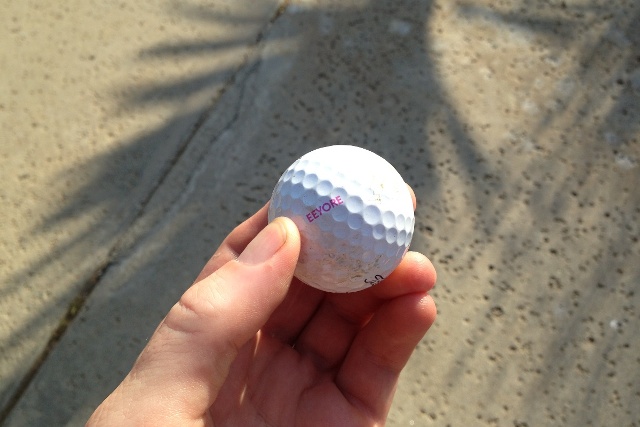 One of the more memorable found balls of my career. Eeyore would be confused by the perpetually cloudless skies at Rancho San Marcos. 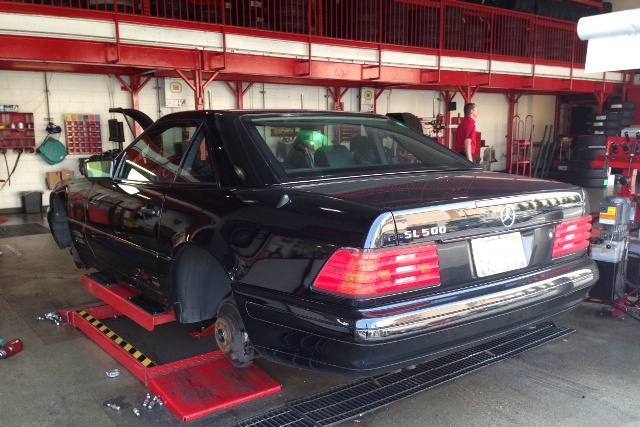 Oh hai, I'm just getting some new tires. See, I cheaped out with some Dunlops the first time around, and they felt hard and wrong for more than 10,000 miles, and I can now confirm that the new ones—Continental ExtremeContact DWS—are significantly smoother and quieter. Japanese tires on a two-ton German roadster? You know I appreciate you, Japan, but I won't make that mistake twice. 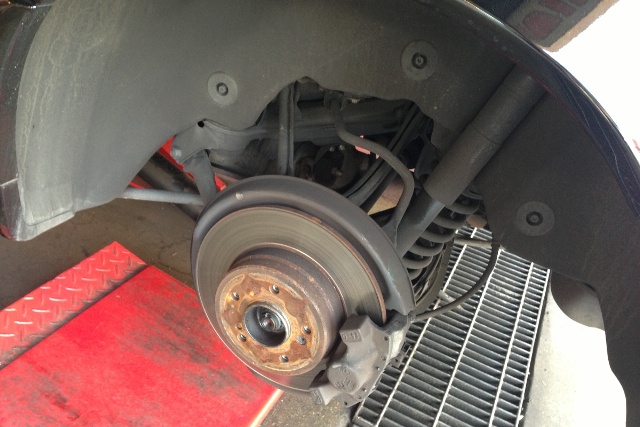 Extreme rear wheelwell closeup. I'd love to see the incomparable Dan Edmunds do a Suspension Walkaround on the 500 Benz. Maybe he could explain why all of those clever-looking items in there can't stop the car's incessant top-down quivering. 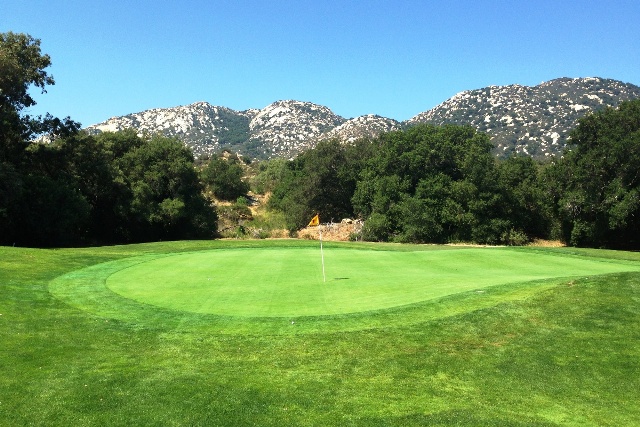 I wanted to test the new tires on a nontrivial drive, so naturally golf got involved. This is Temecula Creek, a beautiful 27-hole layout in a wine-growing region between LA and San Diego. If you go, avoid the relatively nondescript Creek course and play the other two nines. This preposterously vivid and admittedly auto-corrected photo is from the second green at the Oaks course. I'm told the Stonehouse course is even more spectacular. 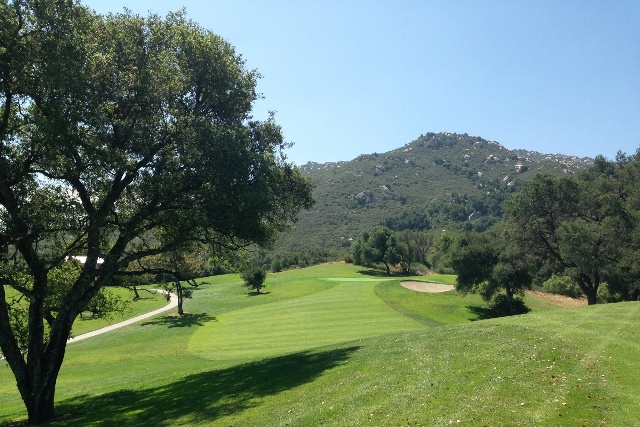 The approach on #4 at the Oaks. One of the hardest golf holes you're going to find. 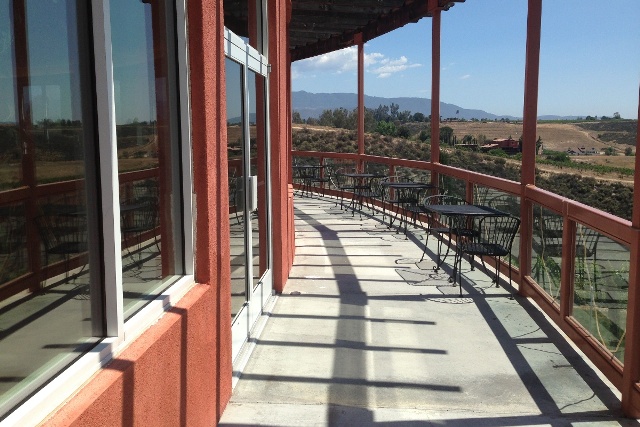 Wasn't the best round in terms of scoring, but lunch at Pinnacle Restaurant afterward made things better. Great views of the quasi-Tuscan landscape from up here. Temecula's too hot in the summer, but otherwise, I give it the 500Benz.com seal of approval. 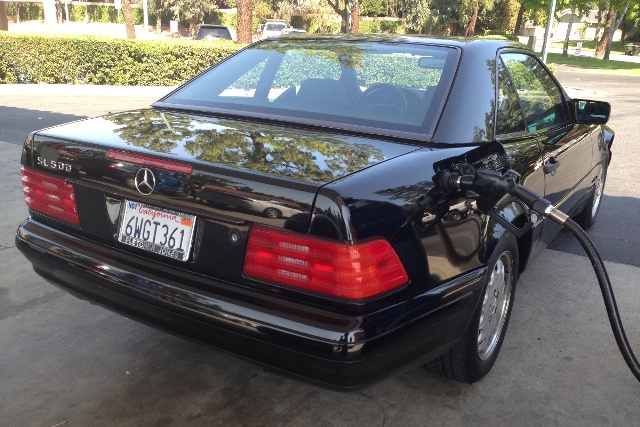 Man, I've said it before, but look at that paint! I don't think the 500 Benz will ever look brand-newer than it did as I refueled at a 76 station in Anaheim on my way back from Temecula. Unfortunately, when I tried to start the car, all I got was a bunch of warning lights and a disconcerting rapid-fire clicking noise from the trunk—which is where the battery lives. Well then. Time to call Mercedes lifetime roadside assistance.

I'd heard about this service, and there's even a sticker for it with an 800 number on the underside of the driver's vanity-mirror cover. Supposedly, Mercedes will dispatch a technician to your disabled vehicle from the nearest dealership, no matter where you are in the country, and he'll either perform the required maintenance on the spot or have the car towed in for free. The repairs themselves are not free, of course, whether they're done on location or at the dealership, but still, it's a nice perk—and it theoretically applies to any Mercedes owner, regardless of how many times the car has changed hands. 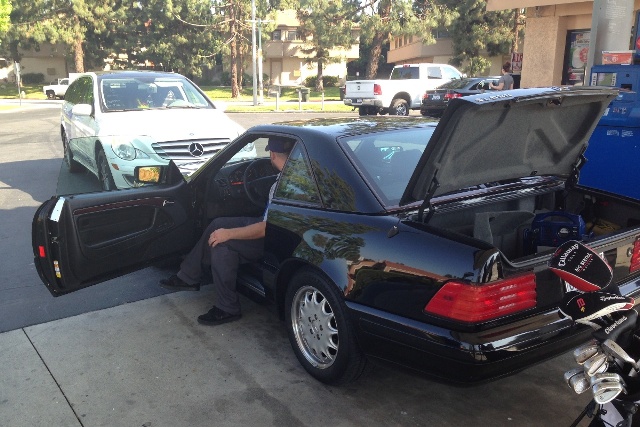 In my case, at least, it worked like a charm. I called the number, they checked my VIN and added me to the database as a new owner, and a Mercedes mechanic from the Anaheim dealership showed up in an R-Class within 45 minutes. He began by jump-starting the car with a special portable device, which I was pleased to see, as R129s are notorious for developing electrical gremlins after being jumped via the traditional battery-to-battery method. Concluding that the battery was the culprit, he asked if I'd like him to install a genuine Mercedes battery right then and there for $175 all-inclusive. 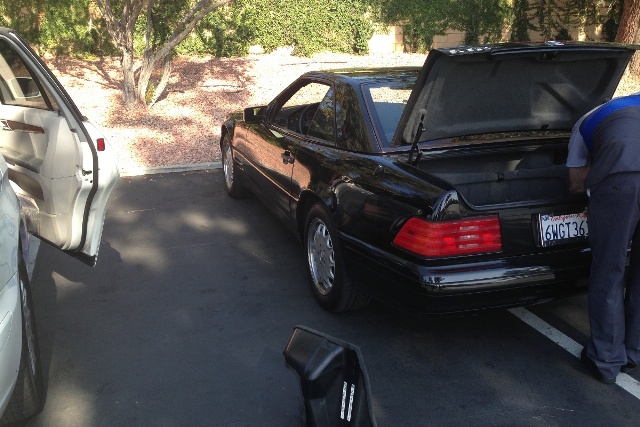 Talk about an offer I couldn't refuse—especially once I saw that the spent battery was made by DuraLast. DuraLast! With due respect to AutoZone, I had to get that nonsense out of the 500 Benz posthaste.

Fifteen minutes later, I gave the man his money and was happily on my way. How cool is that? You buy a 15-year-old car on the cheap, and you're automatically admitted to the roadside-assistance-from-real-Mercedes-mechanics-forever club. 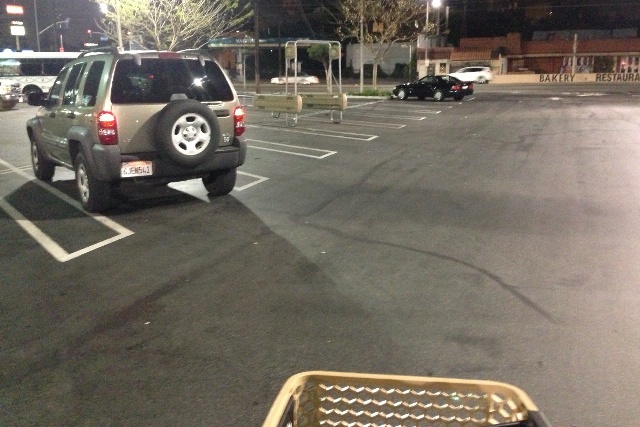 Back in Hollywood, I stocked up on kale and bananas while the 500 Benz kept its distance from anything with wheels. Hey, would you trust somebody who made a conscious decision to buy a Jeep Liberty? Safety first. 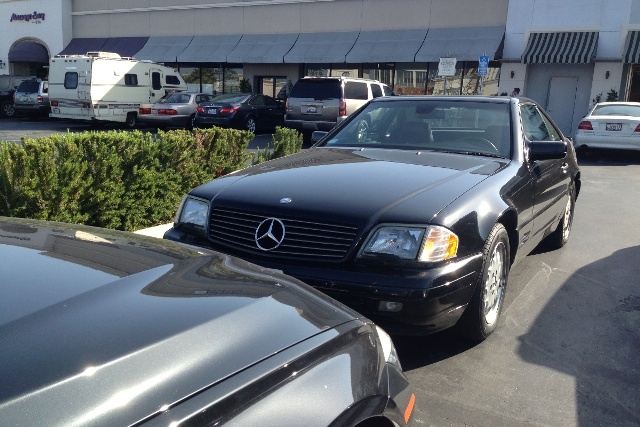 Oh right, and then Captain Nick had another boat party, this time with a live DJ out on the dock. I showed up early and hung out at that nice mall at Lincoln and Mindanao for a while. The Benz is looking stately as usual here, but this angle reveals perhaps its biggest aesthetic flaw: the wheels, especially the rears, are pushed in way too far relative to the fenders. This is something you almost never see anymore (indeed, the optional sport wheels mostly did away with it even back then), and our eyes are collectively much better for it. That old-school wheel spacing just looked frumpy and made people sad.

I'd get wheel spacers, incidentally, but unlike Porsche, Mercedes doesn't seem to provide any support for aftermarket fitments, so I don't want to mess around. In fact, I've never seen a set of base R129 wheels with spacers installed. They're all pushed in like that. So it goes.

Speaking of Porsche, that shadow to the Benz's left looks familiar... 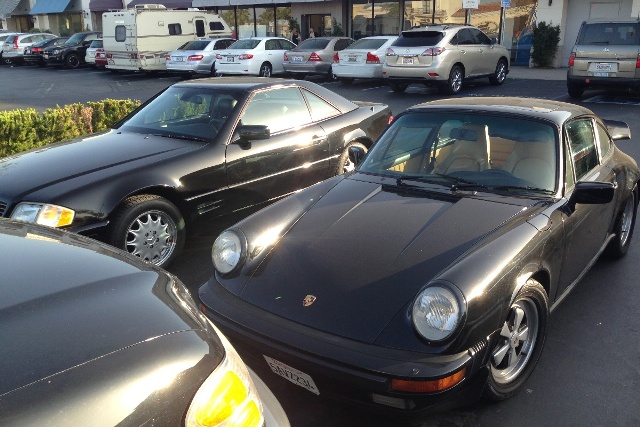 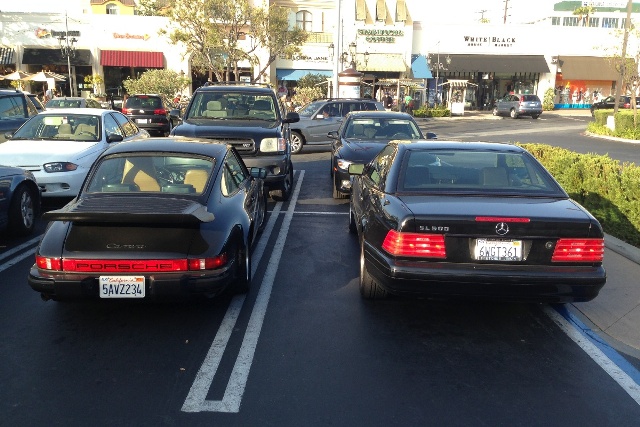 But what's up with the wildly different seat positions? Is the driver four-foot-nine? I didn't even know those old Porsche seats could go that high. The headrest is practically touching the roof. 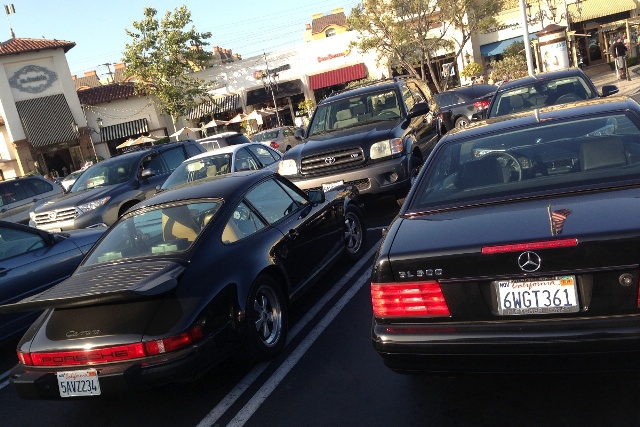 Cool car though. Not at-least-twice-as-expensive-as-the-500-Benz cool, mind you, but cool nonetheless. 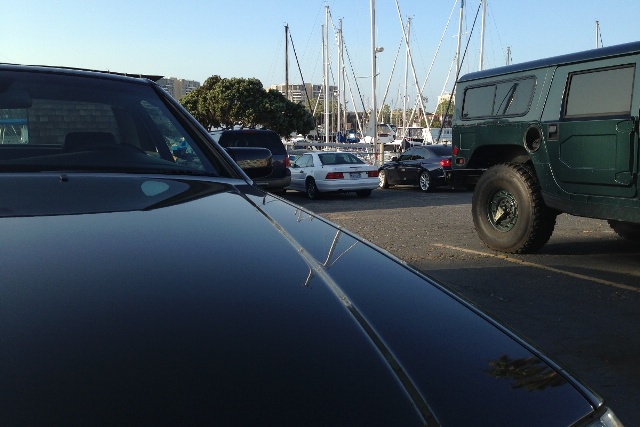 So then it was time to go park at the Marina for the boat party. I will resist the sudden peculiar urge to type "Kumbaya." 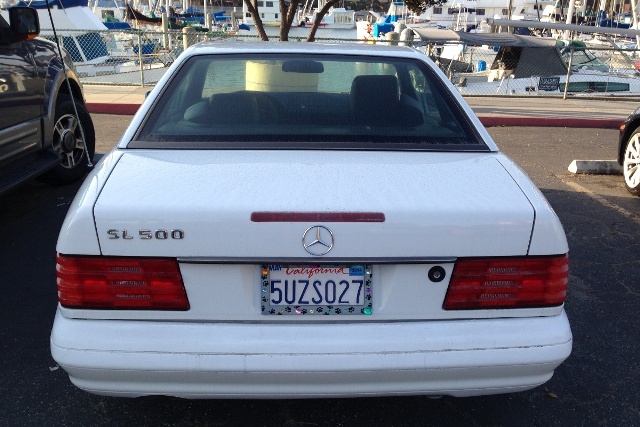 Hm, let's see: SL500 lettering located too high and thus probably removed and slapped back on in the course of some fly-by-night procedure...check. Paw-prints on the license-plate frame...check. Antenna permanently extended...check. Plus more wildly different seat positions. Like most R129s, sadly, this one appears to have fallen on hard times. But hey, it's registered through 2014, so there's that. 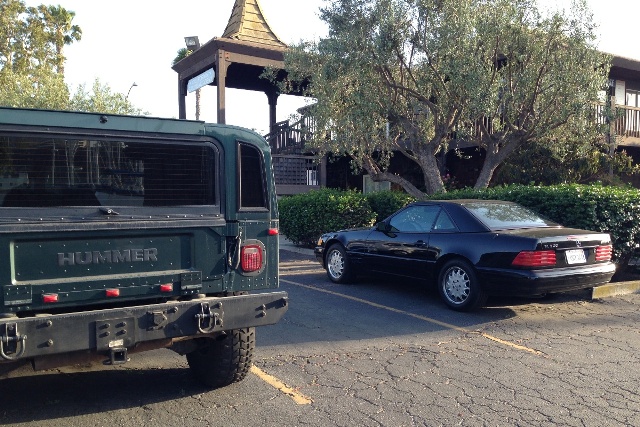 I should also acknowledge the Hummer H1 parked next to me. A rare sight these days, even in LA. 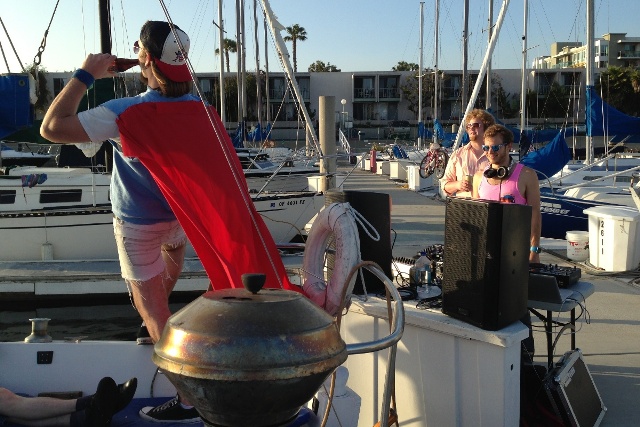 This photo is an adequate summary of Captain Nick's boat party. 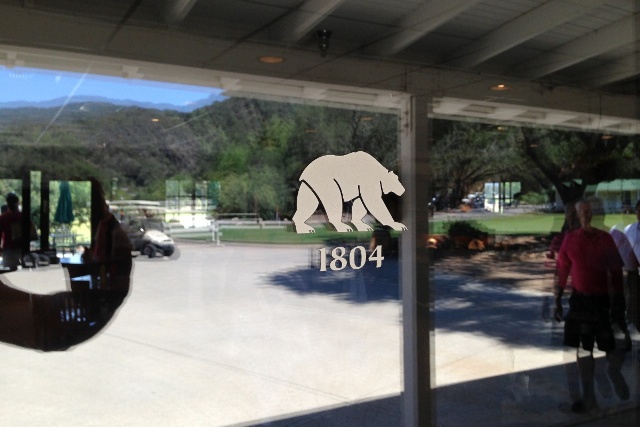 And that does it for the 500 Benz's involvement in this post, but hey, I went to Rancho San Marcos again toward the end of May, so let's look at those photos, too. This is the door to the clubhouse. 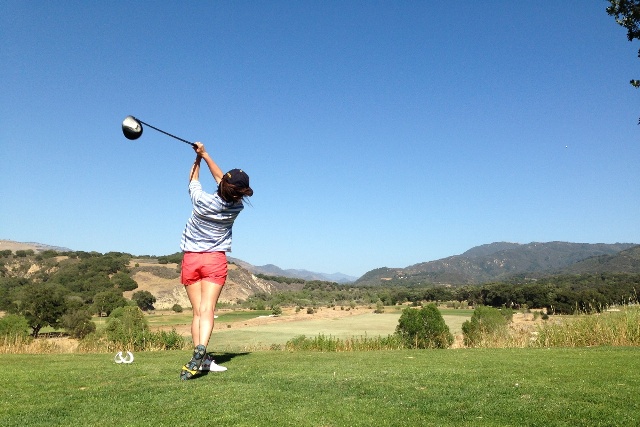 And that, folks, is a picture-perfect golf swing on #18. damurillo has found himself a world-class personal golf instructor. 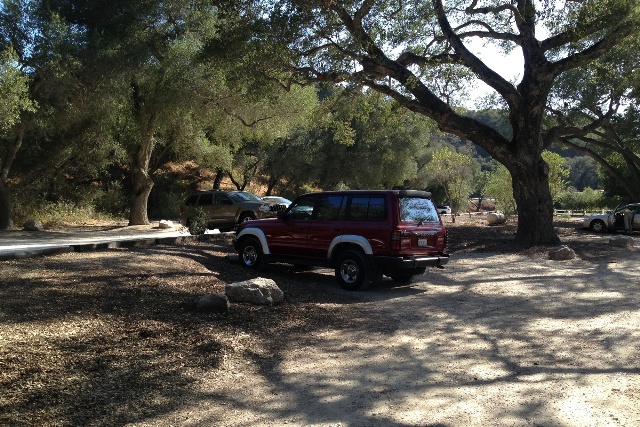 Our burly steed for this trip was none other than the aforementioned Murillo-san's 1994 Land Cruiser. Unlike last time, it followed orders whenever we turned the key. 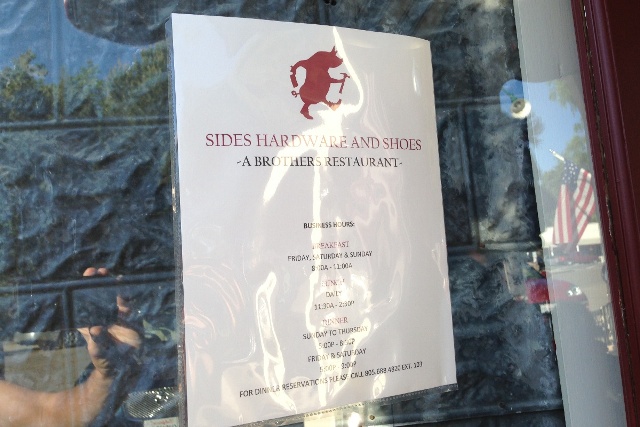 Dinner was at this little place in Los Olivos, a town near the golf course that you may recall from the San Francisco chronicles. If you're thinking about walking into Sides Hardware and Shoes sometime, take the plunge. We didn't regret it. 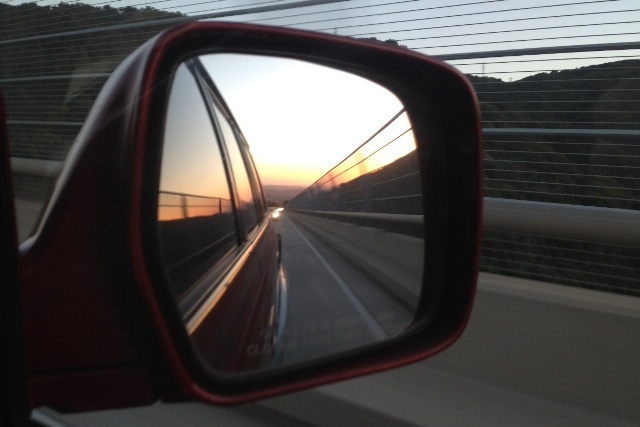 And that's April and May for you. Let us deem the 500Benz.com timeline officially back on track.

posted in: 500Benzlife  Golf Reviews  Spotted in the Wild

Concur on all fronts.

You forgot to add that in the month of April, the Benz endured my aggressive door slams, much to the chagrin of its doting owner. Or perhaps both you and the Benz have chosen to block those embattled days out. I do consider it a small victory that I managed to change my ways about 48 hours before heading back to the old country.

Speaking of blocking things out in April, I still wish I could recall in more detail that epic early am Al Michaels Benz cruise. An otherwise memorable night for both the Benz and Cruiser Bronson.