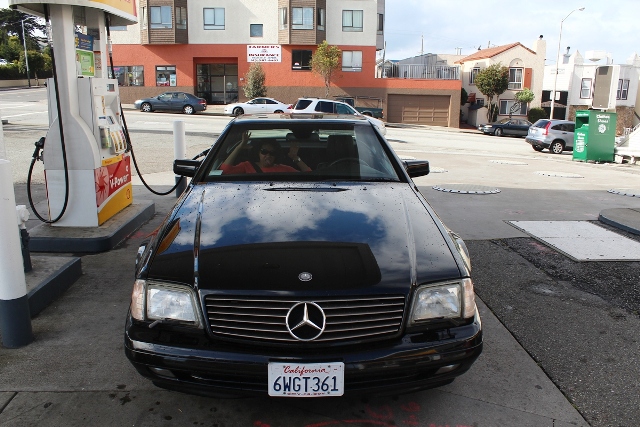 There's some insouciance going on in the passenger seat above, and I didn't appreciate it one bit, because the 500 Benz was looking truly, solemnly beautiful on Sunday morning in San Francisco.

Get close enough, of course, and the car will show its age like any of us—but come on, scroll down and tell me it's not doing a damn good impression of a brand-new R129 right here. 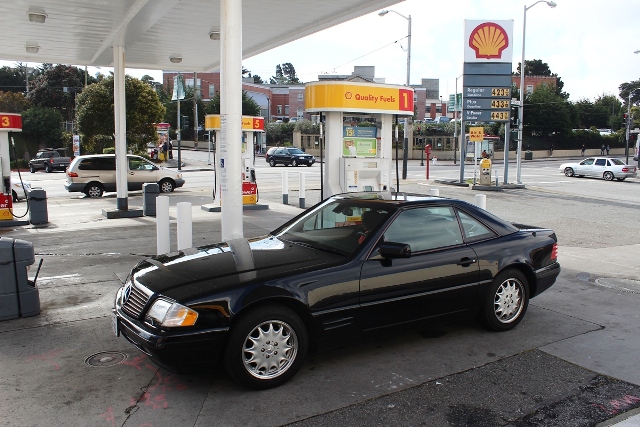 Oh, my. Look at that paint! That's after 425 miles of driving and a night of rain! 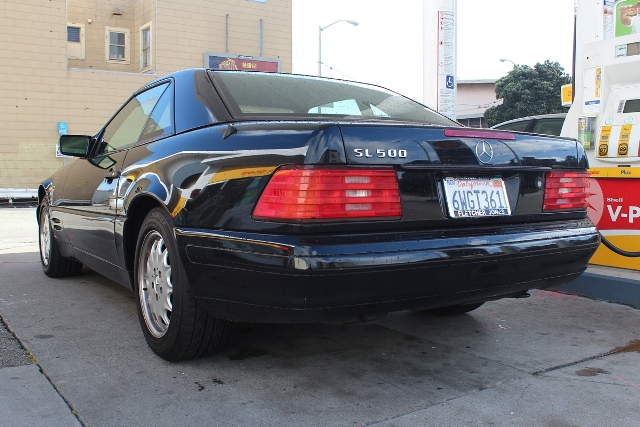 I said look at that paint! And again, the hardtop. So much value added. Goodness.

Speaking of which, go look at the first photo from Day 2 one more time...and also the crazy mirror-finish shot from Day 1, which might be the best of the bunch. 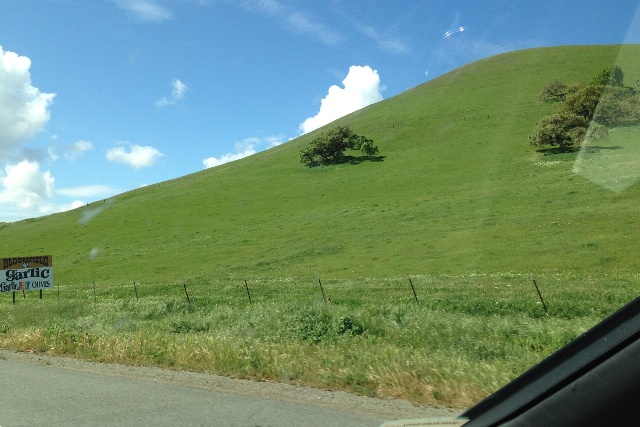 Sorry, okay. So the plan was to head down the 101 freeway to a road called the 154, which veers east into the Santa Ynez mountains above Santa Barbara. I took a bunch of unplanned iPhone photos en route, because much of the drive looks like something a painter would like to paint. This particular scene must be in the vicinity of Gilroy, since Gilroy is the garlic capital of the country, or the world, or something like that. 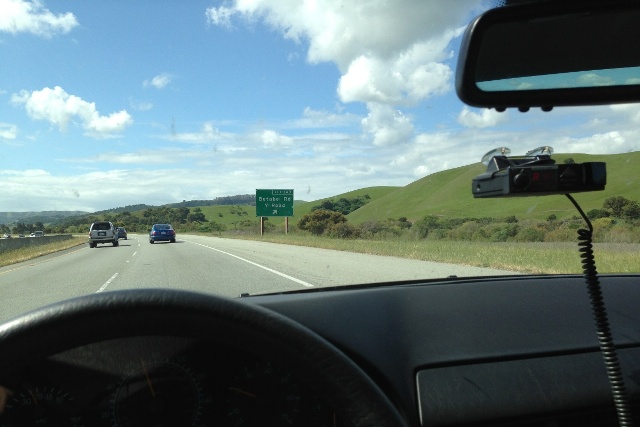 My trusty Valentine One alerted me to a sneaky CHP sniper on the way up, and it kept me apprised of various bogeys on the way back. Zero tickets since I bought this thing about a year ago, which has got to be some kind of personal record. 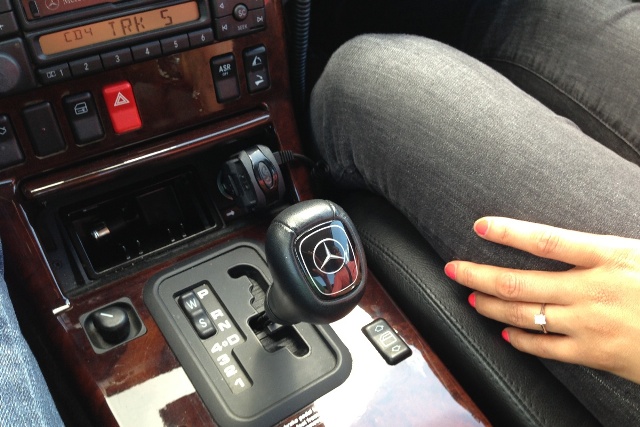 I love the Benz logo on the shift knob, and it mystifies me that they replaced this knob with a generic one in 1999. Isn't this precisely the sort of thing you want to be grabbing if you buy a Mercedes? To me, it's another little sign that the company lost its way for a spell after the Chrysler merger. Of course, I'm always on the lookout for such signs, so take that with a grain of your choosing. 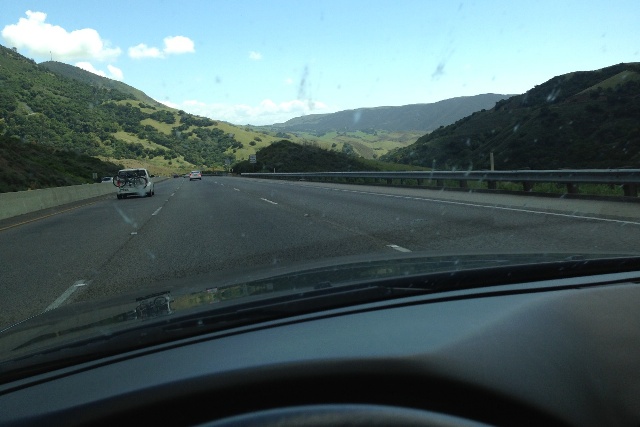 The bug guts were really accumulating at this point. I think we're descending from the Silicon Valley area into the long agricultural stretch around King City. 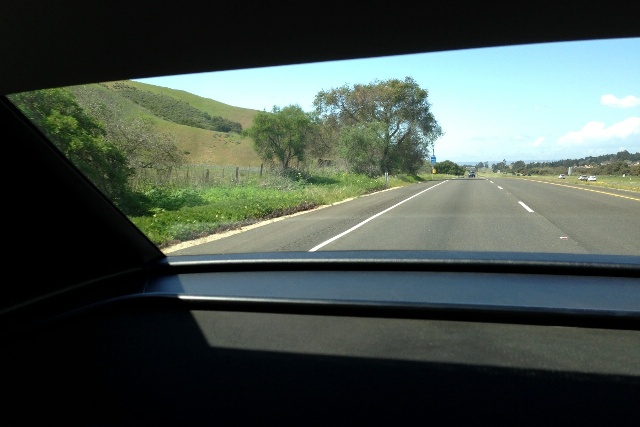 Check out the rear visibility. Doesn't get much better than that; in fact, these days it's just getting worse with each new crash-test procedure that some government unveils. At what point do the costs of poor outward visibility start to eat into the benefits of ever-improving crashworthiness? Talk amongst yourselves. 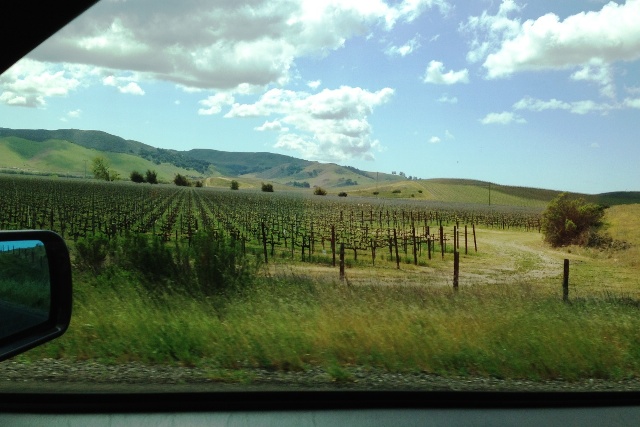 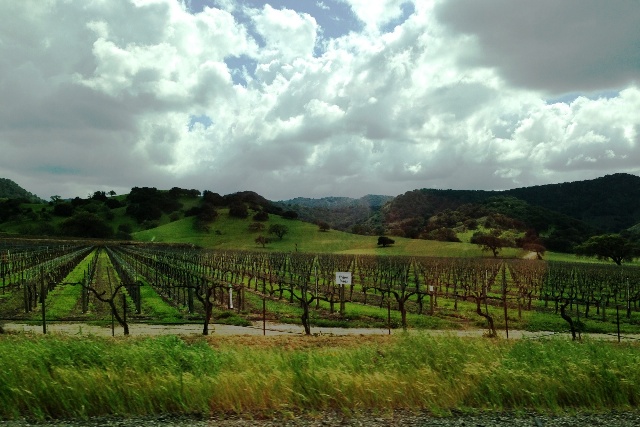 Got some real solid pinot noir in these parts. 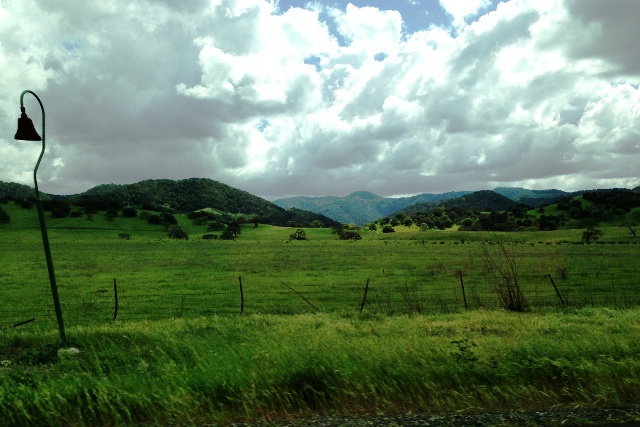 By the by, El Camino Real—Spanish for "The Royal Highway"—is a 600-mile network of California roads that connects the major missions and related outposts from Spain's colonial adventures. I haven't driven all of it, but a lot of it is on the 101 between LA and San Francisco, and it's marked by bells like the one you see here—an early route-marking system that got a serious restorative boost from the state in 2005. It's an interesting story; see Wikipedia's entry for more details. 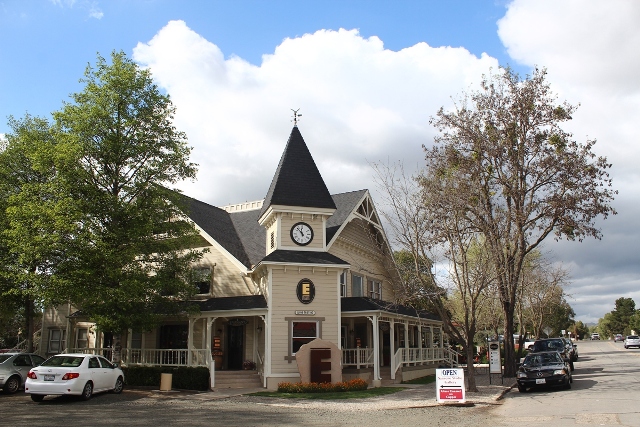 About half an hour later we pulled into Los Olivos, a picturesque little town off the 154. 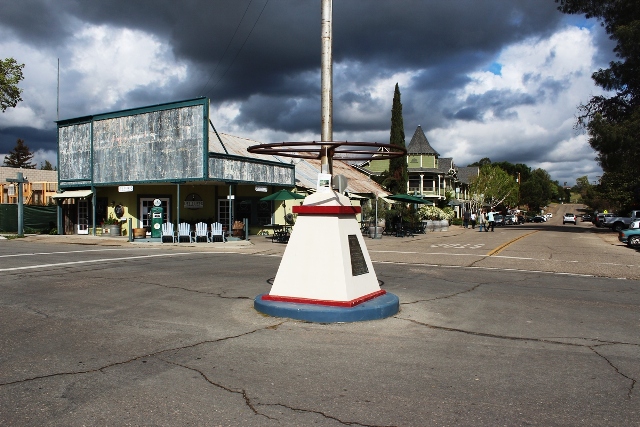 This flagpole marks the center of Los Olivos. Michael Jackson's Neverland Ranch is nearby, I just discovered, and the flag flew at half-mast when he died. 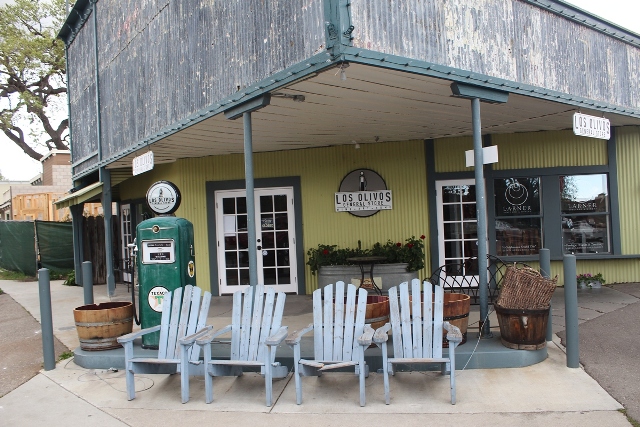 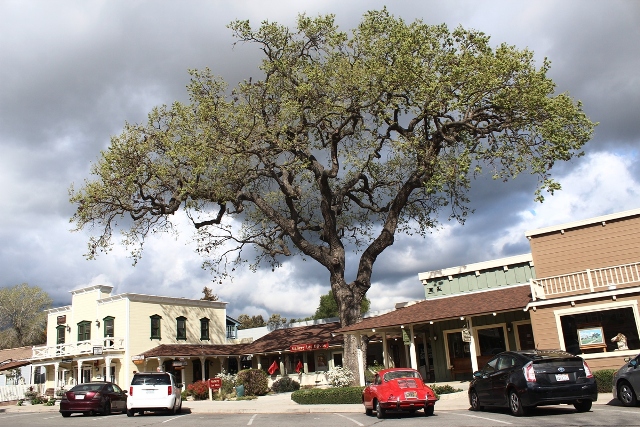 This picture is mainly about the Porsche (and how it's like half the size of that Prius!), but I suppose we could talk about the tree, too. 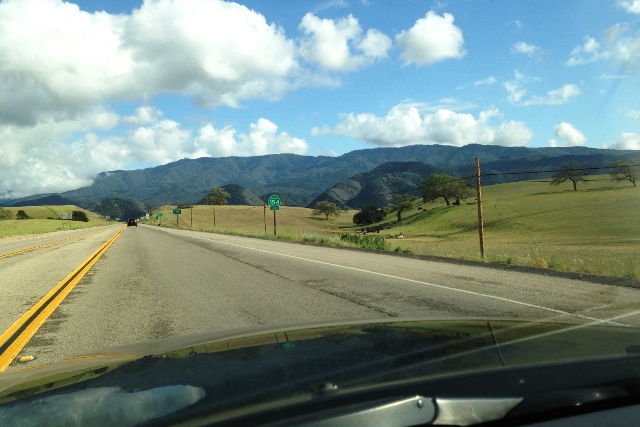 Back on Route 154 now, heading toward the San Marcos Pass. 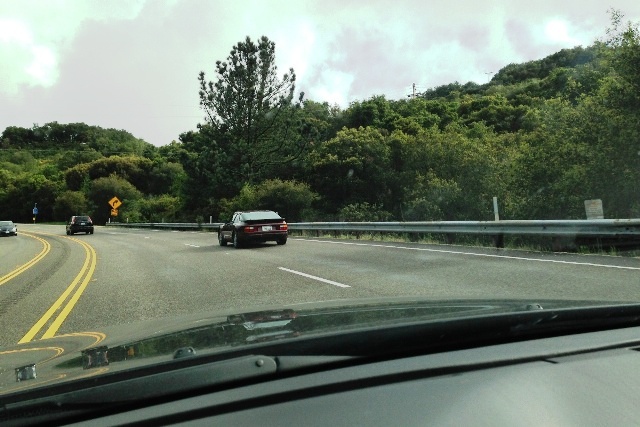 Ah, the Porsche 944. This looks exactly like the first car I test-drove with my dad when we went car-shopping before my junior year of high school. It was a maroon 1983 944, automatic transmission, 150k miles or so, with an as-is price of $2,850. Fortunately for everyone except the used-car dealer, it overheated on the test-drive and had to be towed. Always loved the styling of that thing, though, inside and out. Interestingly, mrs500benz concurs. 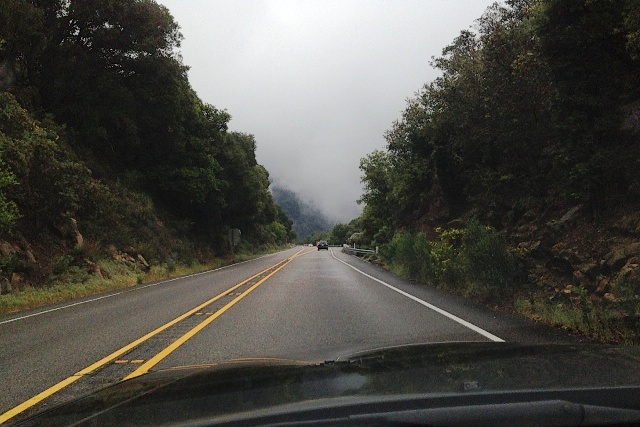 "Gorillas in the mist!" we exclaimed, almost in unison. I don't think I've even seen that movie, but you know, that's what it looked like. 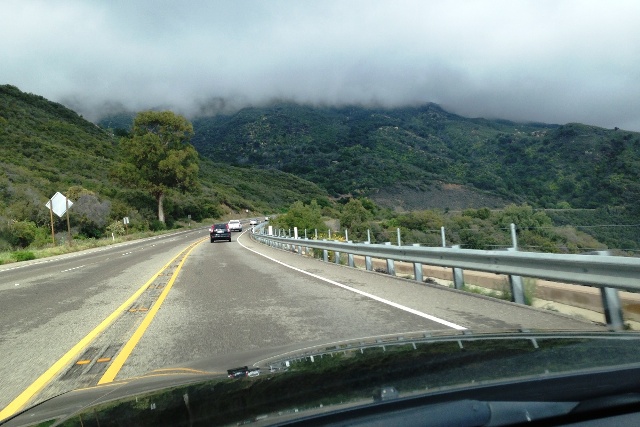 In addition to gorillas in the mist, the scenery up here on the pass reminded us of Hawaii. Can I tell you, by the way, how much I love California for building all of these crazy roads up seemingly every mountain in the state? It's like the whole place was designed for car-obsessed cavemen like me. Right? Why climb a mountain when you can drive briskly over it instead? 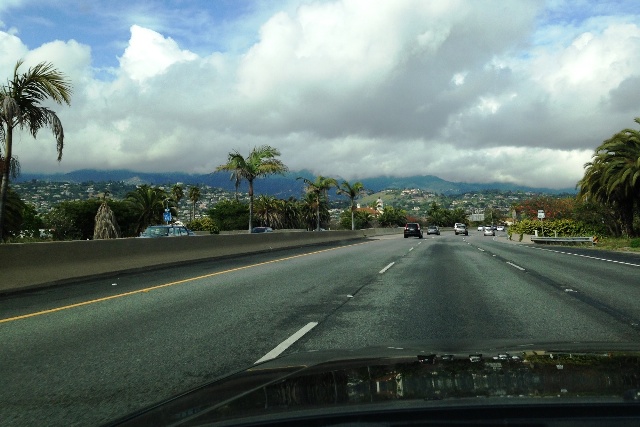 We didn't have time to stop in Santa Barbara on this run, but it's pretty, innit. 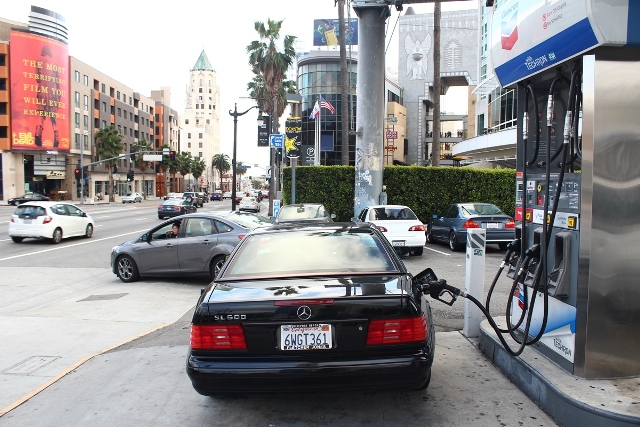 Hollywood ho! Back in our natural habitat. Oh, I said I was going to return to the topic of fuel economy, didn't I. Well... 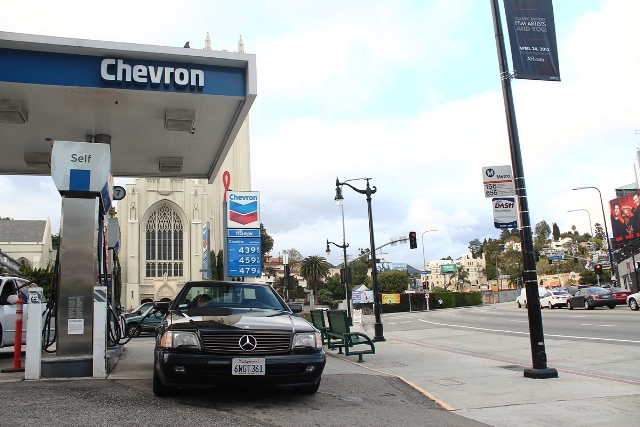 First of all, yeesh that's some expensive gas by March 31, 2013 standards—but if you want numbers, I got numbers. On the way up, we notched 427.7 miles and added 16.945 gallons at the end, but that wasn't a full fill (as you might expect, the 500 Benz doesn't let just any pump fill its noble 21.1-gallon tank all the way). On the way back, we managed 415.5 miles on 18.665 gallons, which was a very full fill. That comes out to 23.68 mpg overall, and if you're just tuning in to 500Benz.com, my driving style invariably involves generous throttle applications, so...I'm not sure what my point is here, but I'm just going to call it an honest 23 mpg and speculate that 25-26 mpg would be attainable with a normal human at the helm.

With that, if you'll excuse me, I'm going to go take a nap.

Ha! I don't feel too sorry for you...I remember taking an R-Class diesel up the coast when I worked at Edmunds, and it felt like a high-speed train on the open road. In fact, I think that's how I described it in my road test.

My other memory of that car is the epic noise its hood makes when you close it. The photographer lifted the hood to take an engine shot, then innocently let it drop down, and BOOM! Had us thinking max-security German prison. We did it a couple more times with awestruck looks on our faces.

Thanks for the interesting set of articles! As I also live in Southern California, they gave me some good ideas for a road trip. However, since we have an eight year old daughter and the SL500 doesn't have a rear seat, we'll have to make it in our R350. (I don't think that my wife would let me go by myself, damn it!!)