Ah, Tahoe—it's no Bend, that's for damn sure. But I drove around the whole lake anyway by mistake, and it wasn't all bad, and then I went ahead and drove all the way back to L.A. 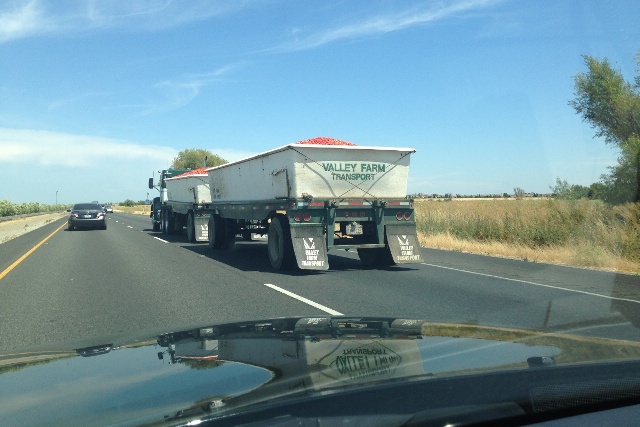 The drive from the Days Inn in Corning to Tahoe was pretty uneventful, though I did see yet another tomato truck. We'd seen a bunch on the way north, too. Maybe this is a common occurrence in northern California, but in any case, I would like to report that a whole lot of tomatoes got moved around up there in July 2014.

Actually, here's something notable about the drive—the road to Tahoe is a narrow two-lane much of the way up the mountain, and that's not the greatest scenario when you've got RVs, rental cars and other slow-moving conveyances making the journey on a Saturday afternoon. Must be brutal in the winter. I found myself disliking the place already. 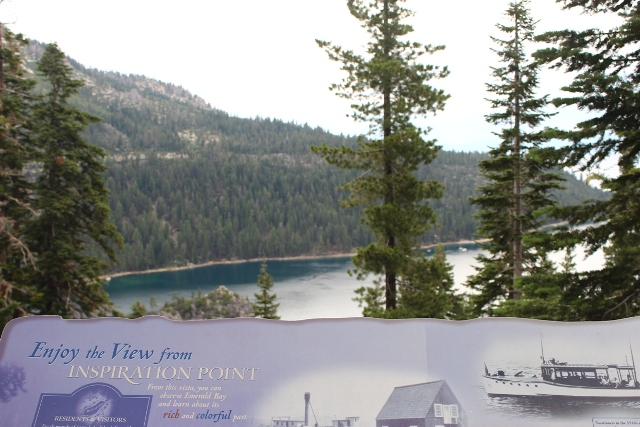 The lead photo was taken here at Inspiration Point, where one learns that Tahoe civilization was basically engineered from the start to service tourists. That includes the road around the lake, which was built in 1913 to facilitate weekend getaways for wealthy Bay Area car-owners. Not that there's anything wrong with that, but it's definitely how the whole place felt to me—like an over-enrolled summer camp for all ages, albeit with an smelly undercurrent of Vegas-style sleaze. 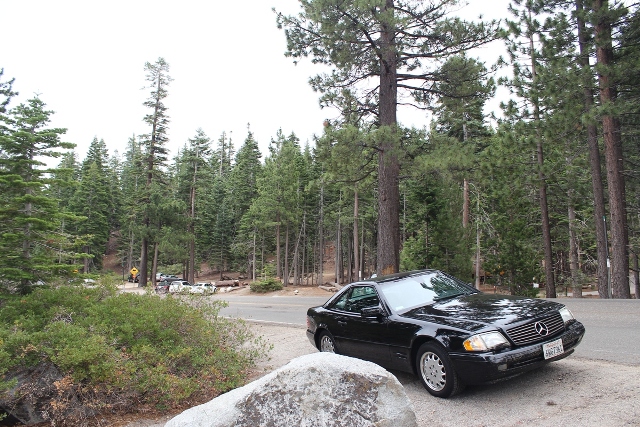 Note the bug guts still on the bumper; that's a job for a professional. 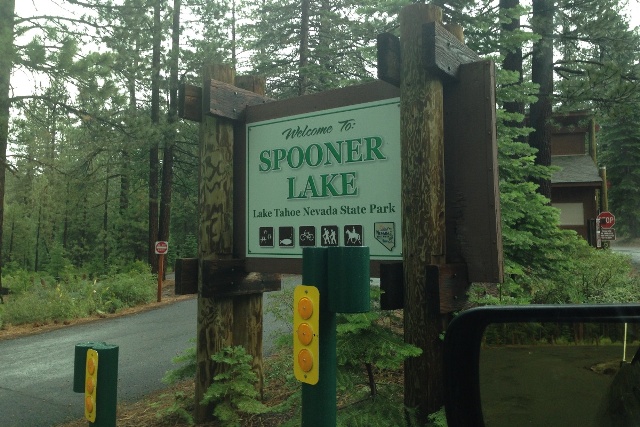 This place was the highlight of Tahoe for me. Located on the Nevada side of the big lake, it's beautiful and blissfully tourist-deprived. 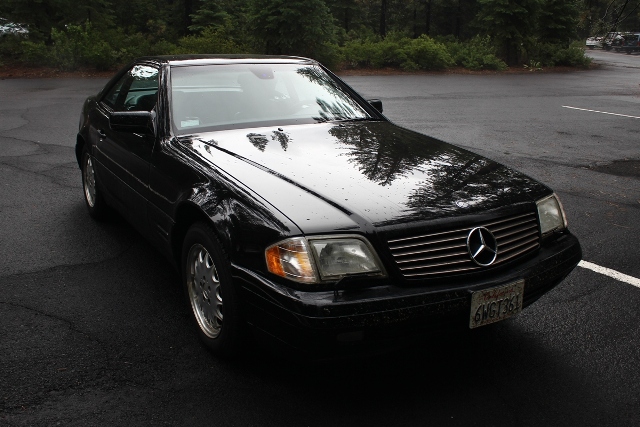 Yep, that's rain on the hood, which implies that I had the uniwiper going before I stopped. And in fact, I did. Want to see it in action? Sure you do.

How about that. Why have two when one will do? 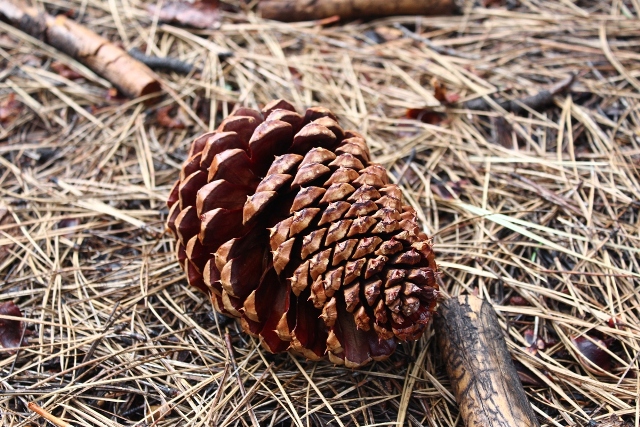 According to my research, that's a Jeffrey pine cone. 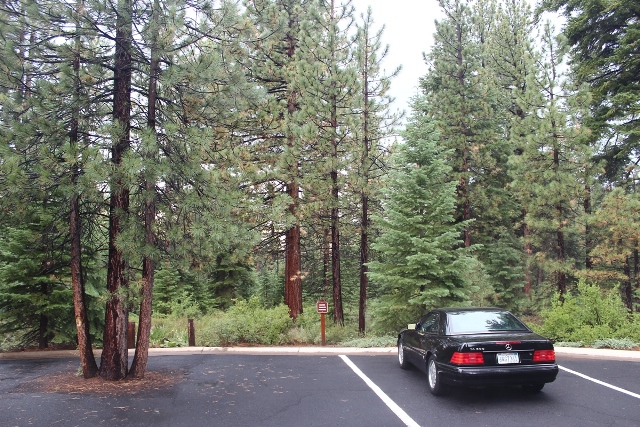 And those, Benzitos, are Jeffrey pines. Jeffrey! How are you sir. 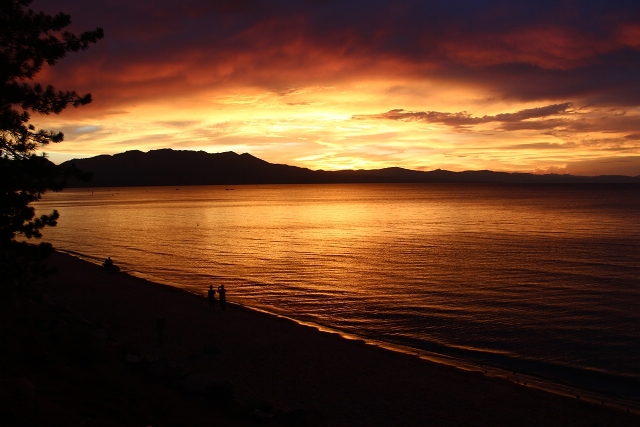 Perhaps the Tahoe gods sensed that I wasn't really feeling what their creation has become, because they served up a sunset supreme as I was about to hit the road. Nice work, guys. Still not digging your town, but nicely done. 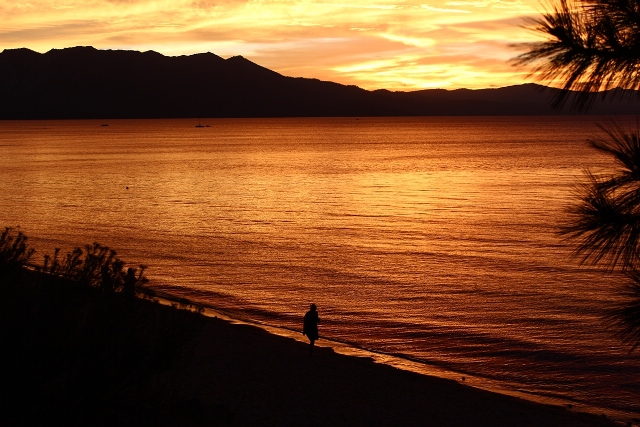 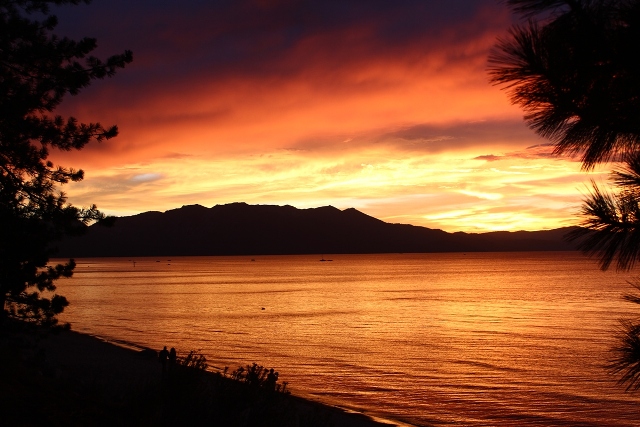 The sun did set. 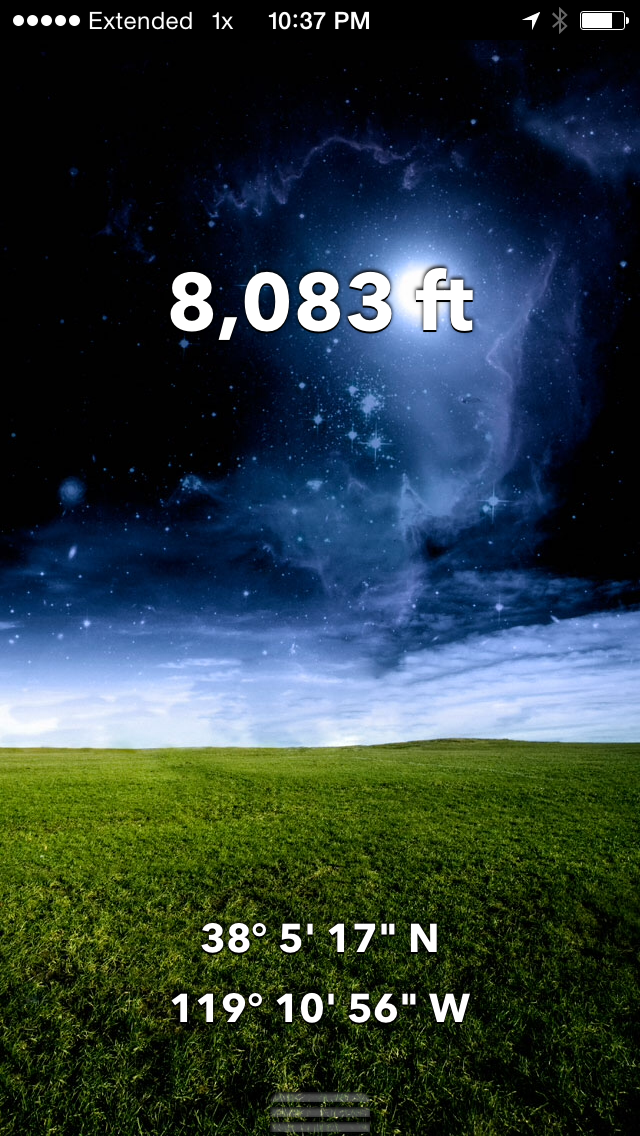 The road back to L.A. starts with Highway 395, which goes right down the eastern side of the Sierra Nevada and is one of my favorite highways ever—except when it's dark and I'm driving a 1998 Mercedes with almost completely useless low beams. You don't notice that in the city, because everything's lit up all the time, but out here, it's laughable. Not to mention a little dangerous. The high beams aren't great, either; sometimes I left them on for safety even with traffic coming the other way, and I never got a flash, so I concluded that my high beams are low beams, and my low beams are, like, parking lights. Xenon headlights were optional in '98, and they're the one missing feature that I really wish this car had. 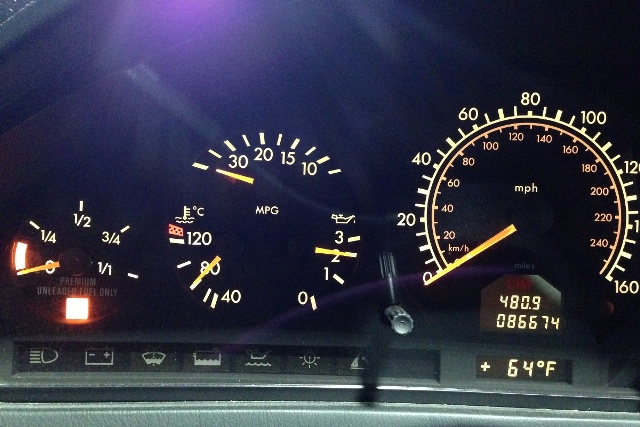 Here's the fuel-economy record, as promised. I had filled up before driving around the lake, which is a journey in itself, so the trip meter showed almost 481 miles when I pulled into a Chevron in Santa Clarita, on the northern fringe of L.A. The car took 17.68 gallons, which is consistent with a previous fill on this trip when the gas light had similarly been on for a while (17.8 gallons), so I'm reasonably confident it was a full load. The math works out to 27.2 mpg, obliterating whatever my previous record was—I think it was 23.9, and my dad was at the wheel.

The moral of this particular story is that if you want to maximize your mpg, start at about 8,000 feet and cruise on down to 1,200. As for overall fuel economy, which of course I was monitoring, I rolled up 2,441 miles from San Francisco (my first full fill of the trip) to Oregon to L.A., and I needed 105 gallons of gas to do it. That math works out to about 23.3 mpg. What was the EPA highway rating for this car, you ask? Why, it was 23 mpg. And the EPA testing cycle back then didn't involve closed courses or floored gas pedals or anything like that. I read somewhere that the 5.0-liter M119 V8 proved quite fuel-efficient at high rpm in the Sauber C9 race car (see below; you're going to want to listen to those noises), so maybe that's got something to do with it.

Anyhoo, it was a command performance by the Benz, which brings me to a related point. If you click on that hyperlinked "23 mpg" above, you'll notice that the current rating is 21 mpg; you have to click on "View Original EPA MPG" to see the higher figure. That's because the testing cycle got more stringent for 2008, and a simple reduction formula was applied to previous ratings to bring them into line. But in my experience (mostly with a 1995 Acura Integra GS-R and a 2001 Honda Prelude prior to the SL500), the original ratings seem if anything conservative in real-world driving, whereas some of the gaudy highway ratings achieved by current vehicles are nearly impossible to replicate.

Explanation? At least in part, I think the automakers have just gotten really good at "teaching to the test." Transmission calibration, tires, you name it, it's all geared toward inflating those EPA numbers to the max. That's fine if you drive exactly the way the EPA drives, but no one does, and so real-world returns suffer—whereas back in the day, perhaps, the automakers were less concerned with every last EPA increment than with achieving the advertised efficiency across a range of realistic scenarios. 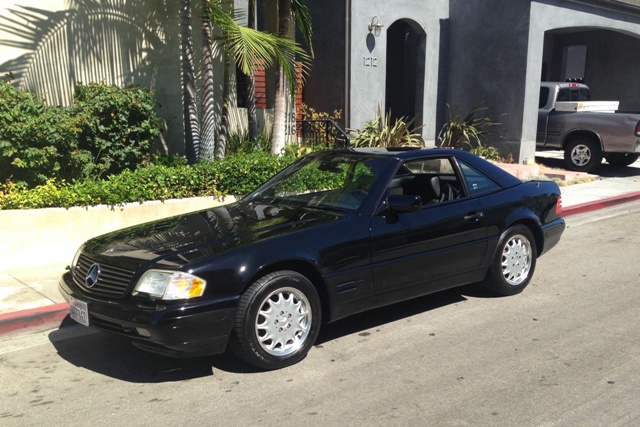 Be that as it may, the next day I got an exterior detail that took care of the bugs, and there we were, back in the mix. I drove a 1998 Mercedes-Benz SL500 from L.A. to Oregon and back, nothing broke, and I wouldn't mind doing it again sometime.

I've wondered about this myself. Mine doesn't fit flush either, and to an extent that's by design, because the top needs room to rock side to side when you're turning into a parking-lot ramp and so forth. Now, of course Mercedes has official parameters for hardtop fitment, and it's possible our tops don't fall within them. There are so many aspects of this complex car that can fall out of spec with time. But in my experience, most mechanics (independent or dealer) aren't sufficiently familiar with the car to give a definitive answer one way or the other.

My advice is to enjoy it to the max as long as most systems are go, and try not to sweat the small stuff, though it's hard, because you know the Mercedes engineers sweated absolutely everything. So it goes in 500Benzland.

I have a '99 SL500. After installing the hard top I noticed that the back does not seat flush to the body, but there is a slight separation.

Everything looks fine and works as it's supposed to, nd I might not have noticed this before.

Is this the way it should be?