I Drove to Oregon: Day 9 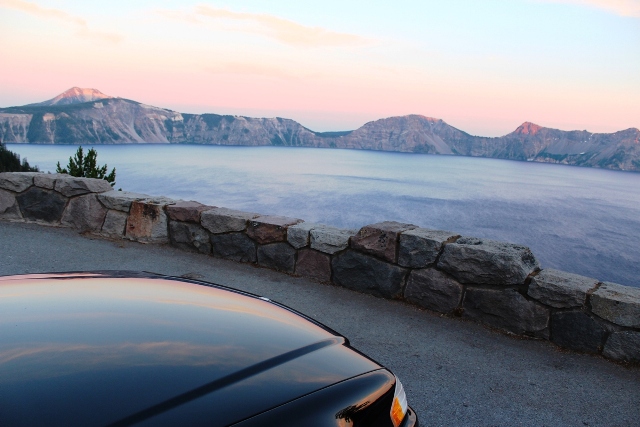 After a thankfully peaceful night in a vaguely Psycho-esque motel on the outskirts of Bend, I lingered downtown for most of Day 9, because really, why would you want to leave? But then I remembered that my destination that night was Tahoe, or close to it—which meant I had to make it to Crater Lake before dusk. 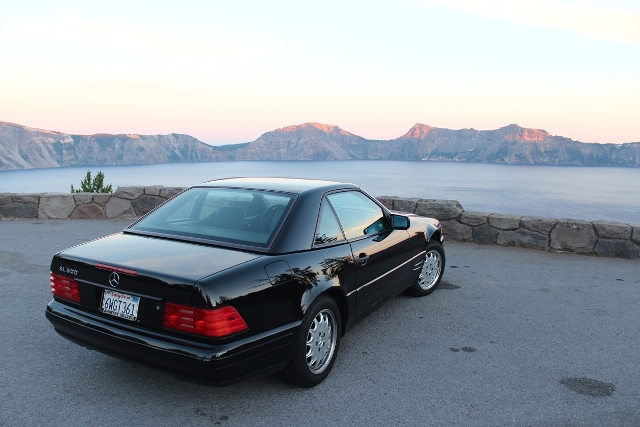 The Google maps say it's two hours and 14 minutes from Bend to Crater Lake, and if it had taken me that long, there wouldn't have been enough light to take this picture. Or any of these pictures. The Valentine One was on high alert, and without going into further detail, all's well that ends with a rimside seat at a Crater Lake sunset.

This is the park access road from the north that takes you up to the rim. The elevation's pretty significant through here—around 6,000 feet, if memory serves. 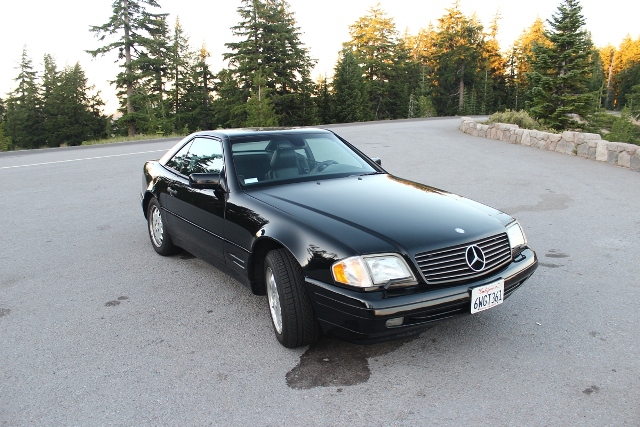 Crater Lake, in case you didn't know, occupies a caldera—basically, a bowl left by an erupting volcano that collapsed, in this case about 7,700 years ago. The water comes exclusively from precipitation. Breathtaking is one of those adjectives that are rarely if ever literally correct (literal?). I'll just say that I emitted an involuntary "Whoa." 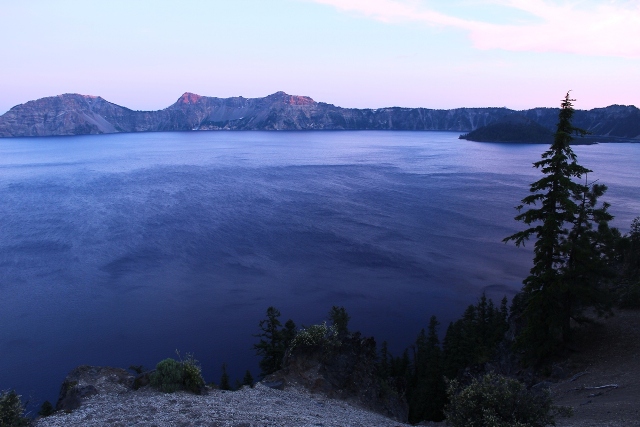 That's not quite what it looked like, but I photoshopped it as best I could. Not enough light at this point; damn caldera rim's blocking it. 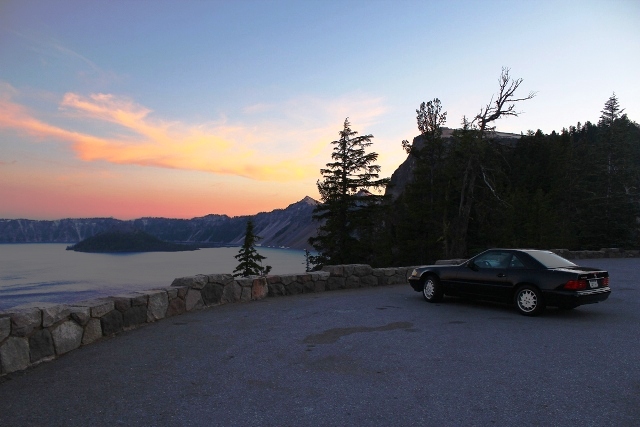 There's an amazing lodge on the other side of that hill to the right. I believe many/most of the rooms have roughly this view. I'll be back.

I'm still astonished that a phone (iPhone 5) can take a photo like this. My Rebel T3i SLR is certainly more capable, but for vacation snapshots, the phone's close enough that I usually leave the SLR packed up.

Back on the road—which would eventually end around 3 a.m. at a Days Inn in Corning, CA—I hopped off at the first closed course I could find and treated the Benz to a well-deserved Italian tuneup. Having recently driven some insane modern machinery, e.g. the 2015 BMW M4 and the 2015 Chevrolet Corvette (as well as Benz's own 2015 E63 AMG), I must admit that the SL500's methodical progression toward 125 mph looks rather quaint. But then again, consider what's happening here. A 4,100-pound car with an engine that dates back to 1990 is effortlessly powering past 100, 110, 120—and it feels just as solid at those speeds as it does at 65. Maybe more so; you get the sense that it hunkers closer to the road the faster you go. Say what you will about the concept of a low-riding, two-ton-plus roadster with smallish dimensions and a big chunk of motor up front, but it's a great formula for high-speed stability.

Incidentally, if you want to geek out with me for a minute, start from the beginning of the video and note the exuberant downshift at about the 1-second mark. In the trade, this is known as a "rev-matched downshift"—you can see that the computer initially thinks I just want to accelerate in the current gear, but then it quickly realizes I'm asking for all hands on deck, so it first "blips" the throttle to raise the engine speed, then gives me third gear (which is good for about 120 mph) and off we go. What's so special about this? The transmission is a five-speed automatic that debuted in 1996. Automatics just didn't do this back then, and even today it's not that common for a conventional automatic to blip the throttle when you punch it in Drive. Of course, there's nothing necessary or even particularly useful about a rev-matched full-throttle downshift with an automatic—the torque converter should smooth out that shift well enough on its own—but it sounds cool, doesn't it? This was Benz's first-ever electronically controlled transmission, and I imagine the engineers had some fun playing around with it as they explored the possibilities. 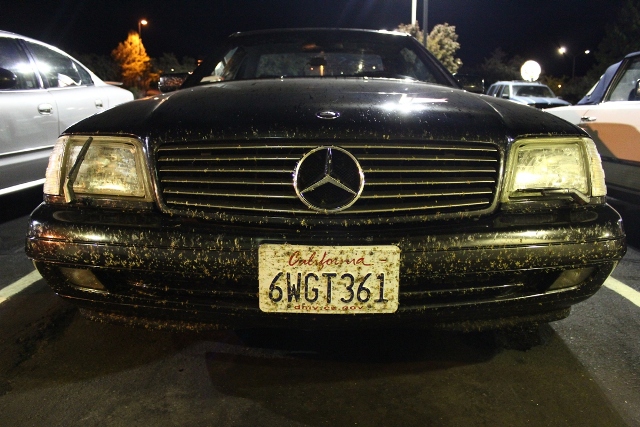 This actually didn't happen on the closed course. I was driving along Highway 97 South toward Klamath Falls, OR, minding my own business, when suddenly it started raining. Hard. The windshield wiper (remember, there's only one) couldn't keep up; there were smears and streaks everywhere. At some point I realized that the stuff accumulating on the windshield wasn't water; it was bug guts. You can see that the poor passenger-side headlight wiper tuckered itself out trying to fend off the hordes. 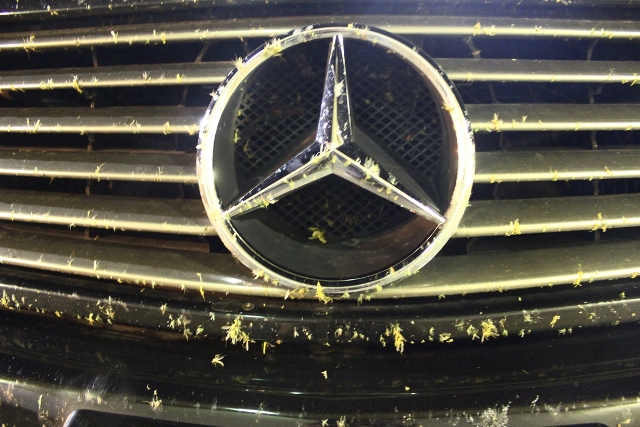 They got in deep. 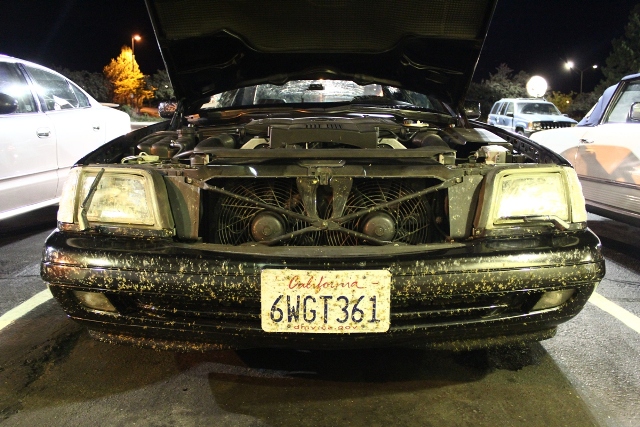 Some even made it through the grille to the cooling fans. How about those big ass fans, by the way. They make a ferocious noise when it's hot and the A/C's on. I sometimes wonder if something's slightly broken in there. 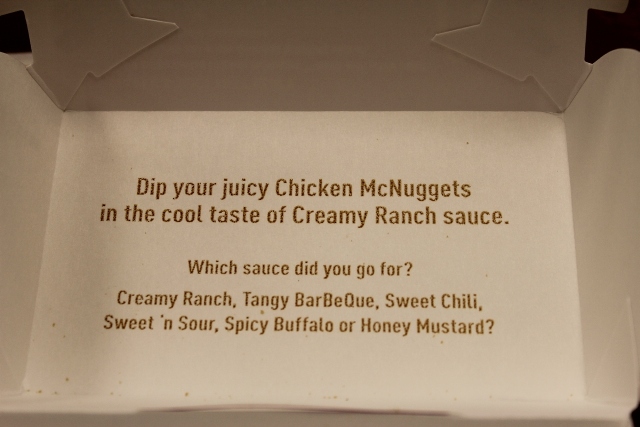 I went for Buffalo and Ranch, per usual. Where would I be without Chicken McNuggets? Perish the thought.

Day 10 Forecast: Tahoe and a fuel-economy record that shall never be broken.