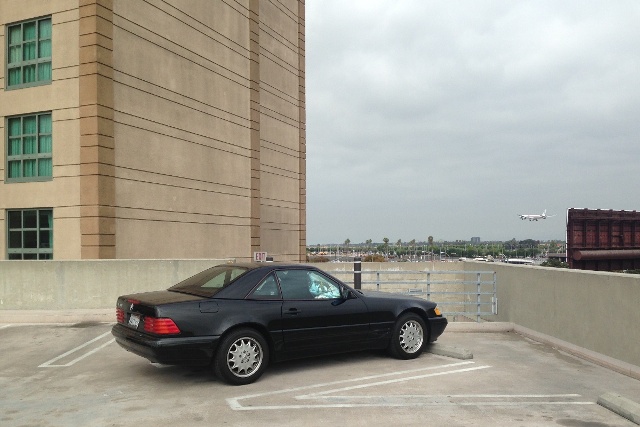 The first question when I'm flying out of LA on a press trip is obviously how I'm going to keep the 500 Benz's noble German sheetmetal door-ding-free, and last Wednesday the answer was this handy diagonal spot on the roof of the Renaissance LAX.

Then I start to wonder about what I'm driving and where I'm driving it, and in this case the answers were "the new 2014 Lexus IS sedan" and "San Francisco," respectively.

Let's do a video first. This one, shot on Thursday around 1pm, is notable mainly for its abortive acceleration runs, bumbling utterance of "D-SLR" (2:50), and views of downtown San Francisco from Treasure Island, though I should add that when I say there's some "graininess at the top" (2:03), what I mean is that the IS 350's 3.5-liter V6 has a minor vibration issue near redline. You can actually feel the vibes through your speakers when the throttle's mashed at 1:01 and 2:22. I've written a lot of nice things about this motor over the years—it's a carryover from the previous IS, and a version of it without direct injection has powered numerous of Toyota products since like 2007—but it's plainly not as smooth as the BMW 335i's inline-6 (an inherently smoother engine type), or even the V6s found in the Audi S4 and Mercedes-Benz C350. In this business, that's something to talk about.

Shame Toyota ditched its own excellent inline-6, which was last seen on our shores in the Toyota Supra and Lexus SC300 from the 1990s. (EDIT: Oops...and also in the original IS300, as an astute reader has reminded me. Last seen there in 2005.) 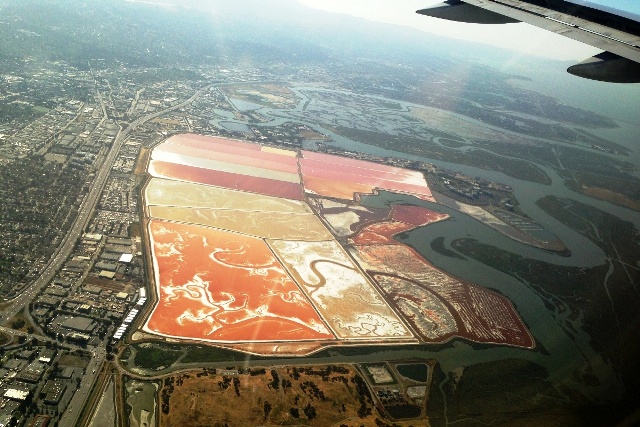 Okay, back to the photos. I snapped this scene during our descent into SFO on Wednesday, and I had no idea what I was looking at. Turns out those are salt evaporation ponds, i.e., artificial ponds in which seawater matures over five years(!) into salt brine, which then gets converted into table salt. The crazy colors and patterns are produced by various microorganisms that come and go during the process. Fascinating, eh? You can read more here. 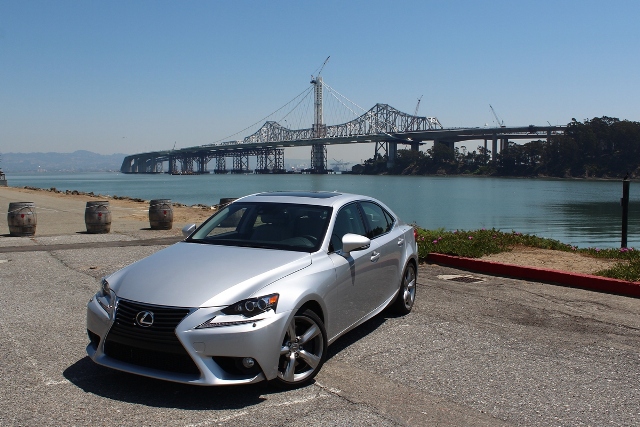 Here's a 2014 Lexus IS350 on Treasure Island, the same car that I'm driving in the video. I don't have anything nice to say about the styling from this angle, so let's just move on. 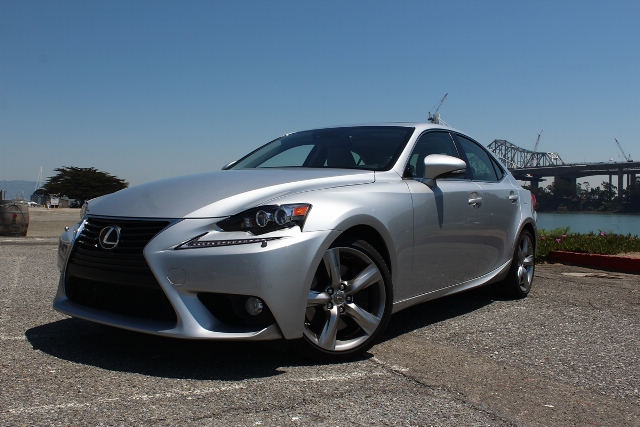 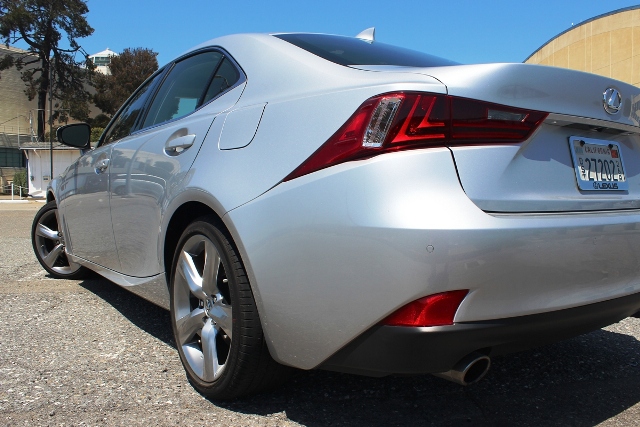 This angle—the "rear three-quarter," we call it in the trade—is the new IS's best, I believe. I really like the taillights, and it's cool how each taillight tapers into the bumper seam, which, if you trace it through the wheel well, picks back up again under the rear door. This is visually interesting stuff. 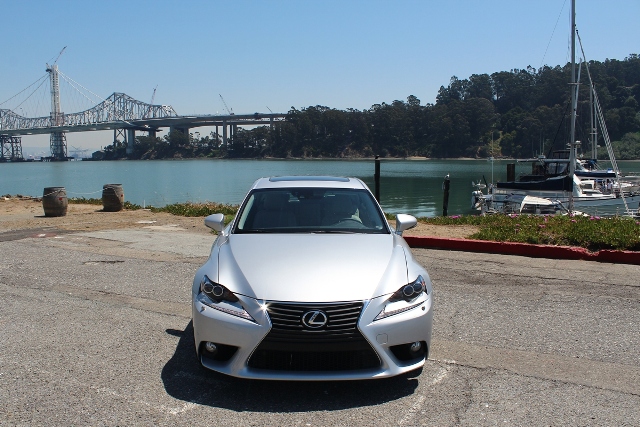 And okay, if I saw this mean mug come up behind me in traffic, I'd give it the internal nod of approval. It's definitely an aggressive look, and at least where the sporty IS is concerned, I think that's appropriate. As for the recently redesigned GS and LS sedans, however, which have many of the same Fast and Furious styling cues, I still feel like Lexus lost the plot. 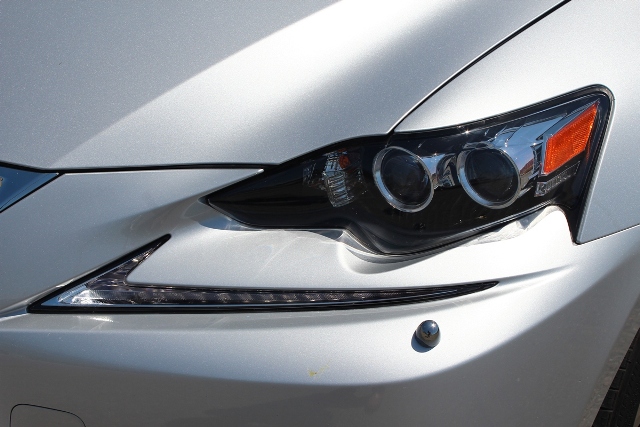 As with many new designs these days, this one seems to show best in bite-sized pieces. It's overall cohesion that designers are struggling with right now.

Perhaps I'll send them some photos of the 500 Benz. The lead photo in this article, for example. 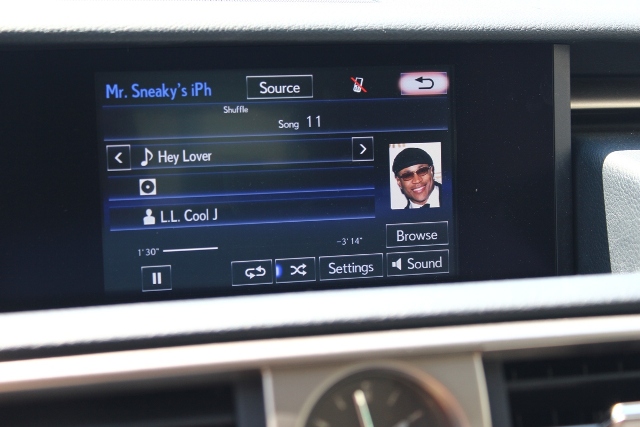 No complaints about the infotainment display, though, at least not when it's playing "Hey Lover." Look, a headshot of the man himself! Swimming in the timeless currents of pure bliss, no doubt. 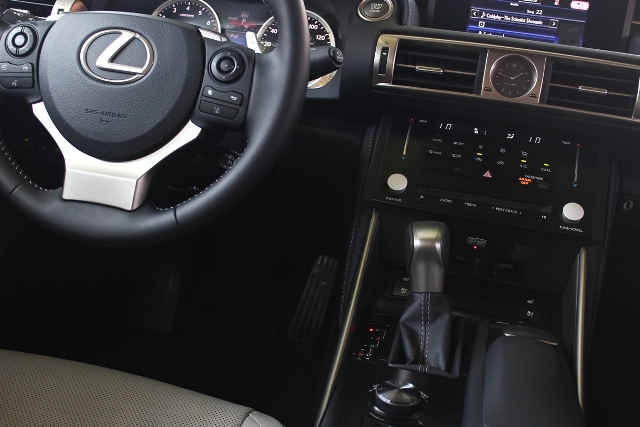 Actually, the whole interior is pretty nice. I love the rakishness of the center stack, and there's generally a strong sport-coupe vibe from the driver seat, even though the backseat is considerably roomier than before. Coolest Toyota interior since the aforementioned Supra's sleek cockpit—you heard it here first.

The snug front seats are standouts, too, and they come standard on everything, even the base IS250 with the wimpy 2.5-liter V6. If I had to compare them to other seats on the market right now, I'd pick something from Porsche. They're that good. 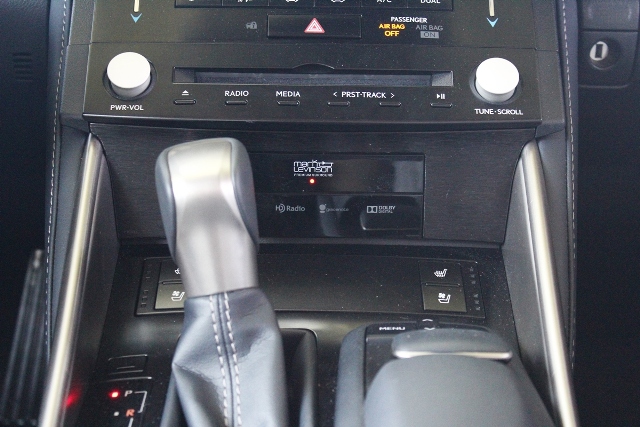 Alas, the 835-watt Mark Levinson stereo is kind of blah, if you can believe it. I put on some of the same songs when I got back into the 500 Benz Thursday night, and damned if the Benz's 15-year-old, 200-watt Bose stereo (that's your cue, Ken Rockwell) didn't sound punchier, bassier, and generally richer. Just goes to show that you can't judge a stereo by its wattage and brand-name alone, impressive though both may be. 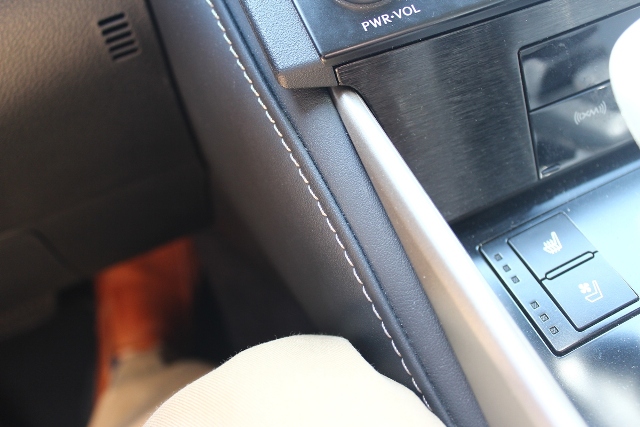 In any case, major brownie points for these supple knee-pads. I can't tell you how many times I've cursed a car's center stack for being encased in hard plastic, because that's often right where my bony knee ends up resting. But Lexus saw me coming and had a nice padded area waiting for that knee. There's one on the passenger side, too. 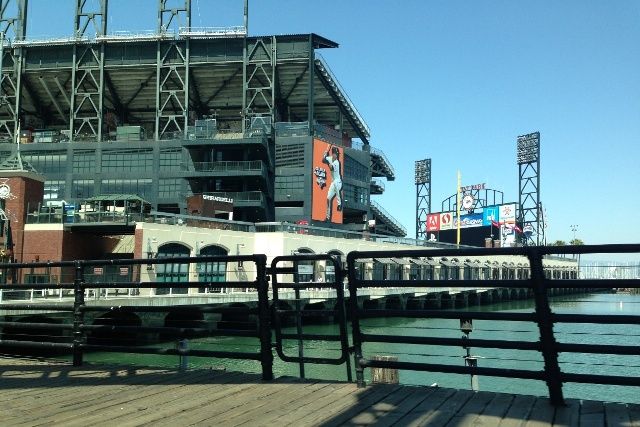 And that about does it for the Lexus event. Here I'm heading to the airport in an ES Hybrid, sipping Fiji water like a boss. Never been to AT&T Park, but it looks inviting from this vantage point. That's McCovey Cove, by the way, which is best known for swallowing a bunch of Barry Bonds moonshots and briefly hosting a DeLorean hovercraft. 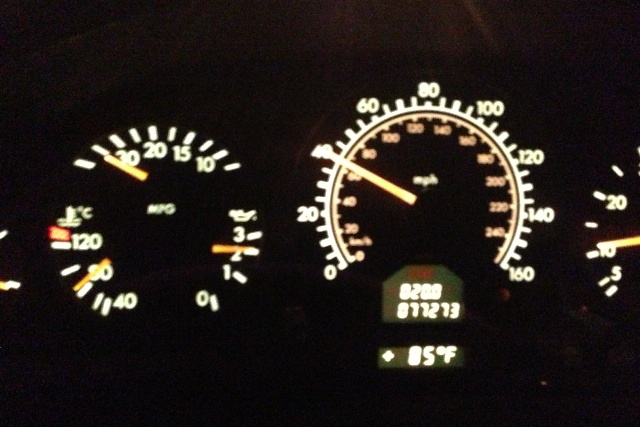 When I got back to LAX, it was about 10 o'clock on Thursday night, and the Springs Fire in Ventura, which is up the coast a little ways from Malibu, was getting serious. I decided to drive up the Pacific Coast Highway and see what was going on. PCH was completely closed just north of Malibu, but I stayed on it long enough to see that the temperature was an astounding 85 degrees out there. We're talking 100 feet or so from the Pacific Ocean. You can't see the clock, but it's like 10:45pm at this point. If you've ever heard of the Santa Ana winds, well, that's what they do—they reverse the usual cooling effects of the ocean breeze. 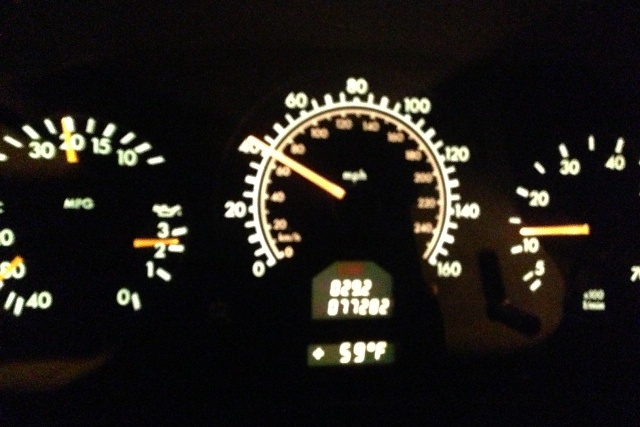 Up at the 101 Freeway, meanwhile, which is 14 miles inland from Malibu where I hopped on it, the temperature was 59 degrees.

As my favorite Japanese English teacher would have said: "Life in California States!"

Exceptionally nice pix of the Lexus -- though not enough for me to trade my fave ride: '95 Acura Integra, 145,000 miles young today.

Thanks for the info on the salt evaporation ponds -- wondered about them on a recent landing at SFO. Great abstract art!