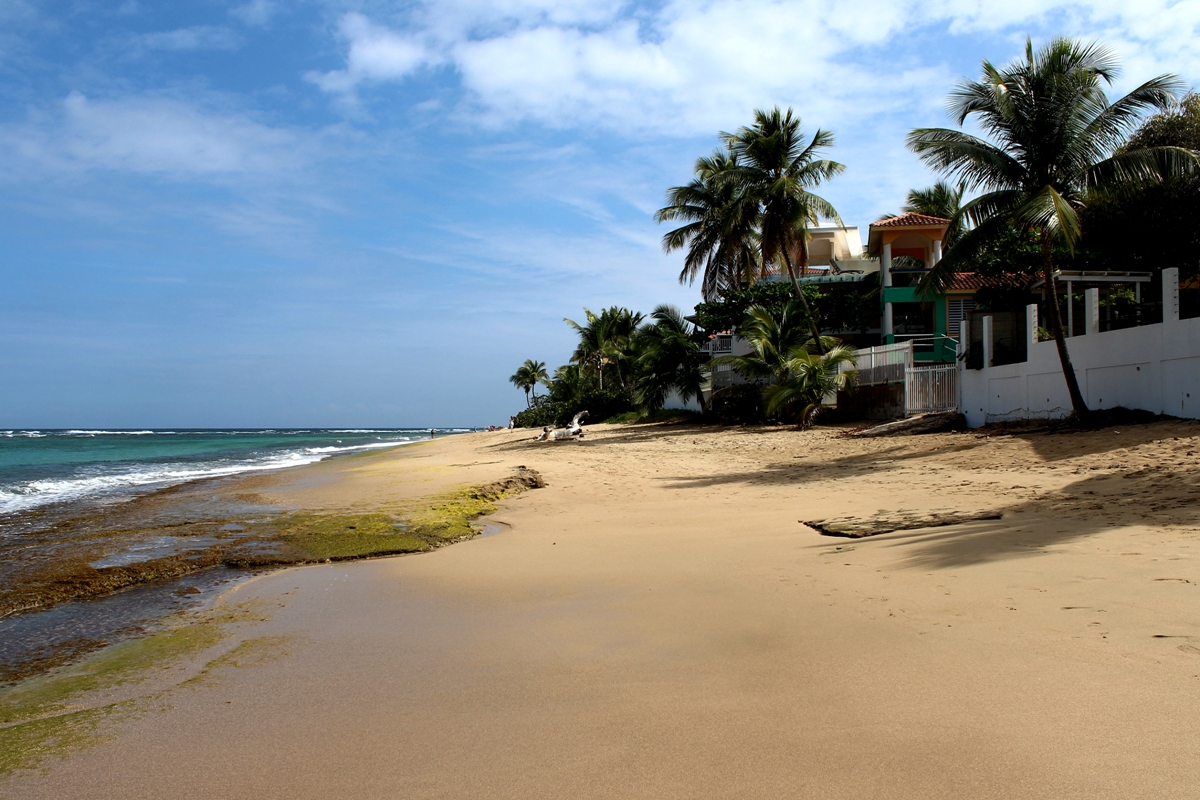 Shortly after an ominous cloud bank compelled me to put the Mustang's top up (see Day 3 video @5:46), the rains arrived with real exuberance and stayed for a few hours, making for some unpleasant nighttime driving en route to Isabela.

But we got there in one piece—even had time to stop at Walmart for supplies and put down a nice authentic meal at Panda Express (yep, Puerto Rico really is the U.S.)—and then we awoke the next morning to this... 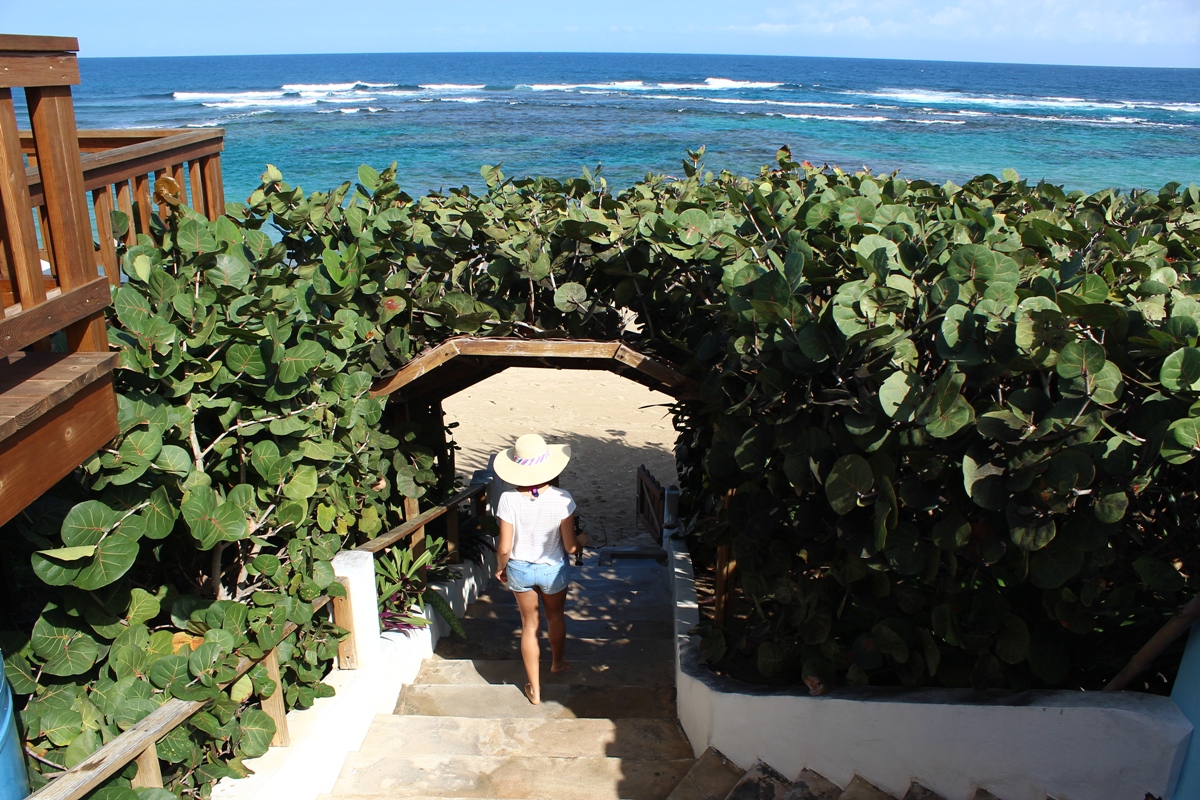 That's the entrance to Shacks Beach from the main deck at Villa Tropical. When they say they're right on the beach, they are correct. 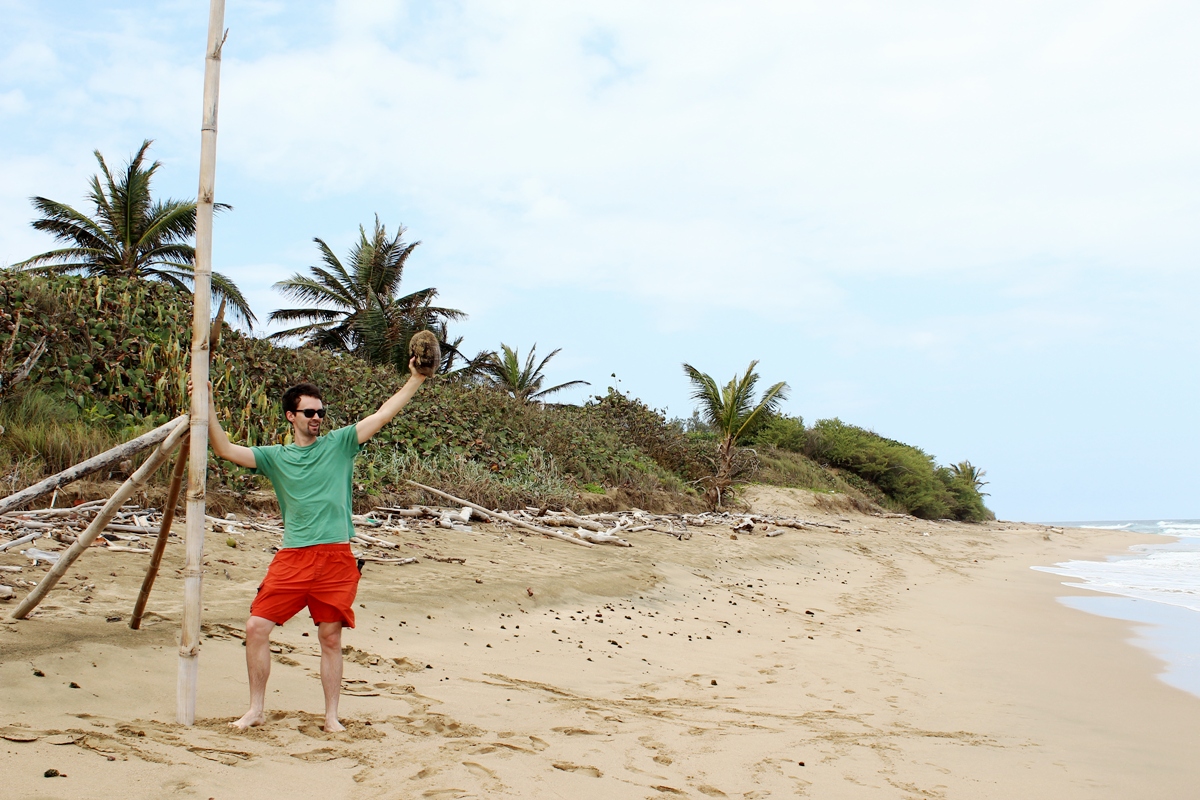 We promptly hit the beach and turned left, where it eventually got cloudy and I triumphantly found a coconut. 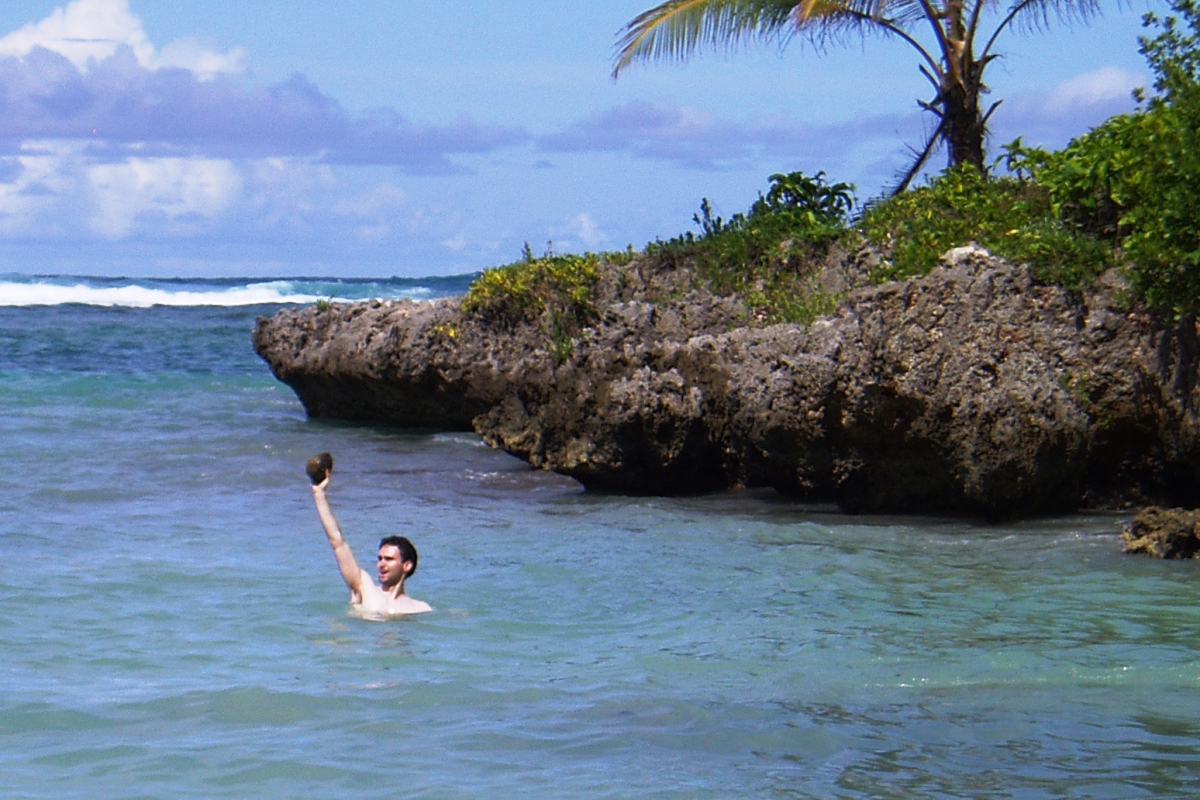 Which was eerily reminiscent of that time I triumphantly found a coconut in the Dominican Republic. 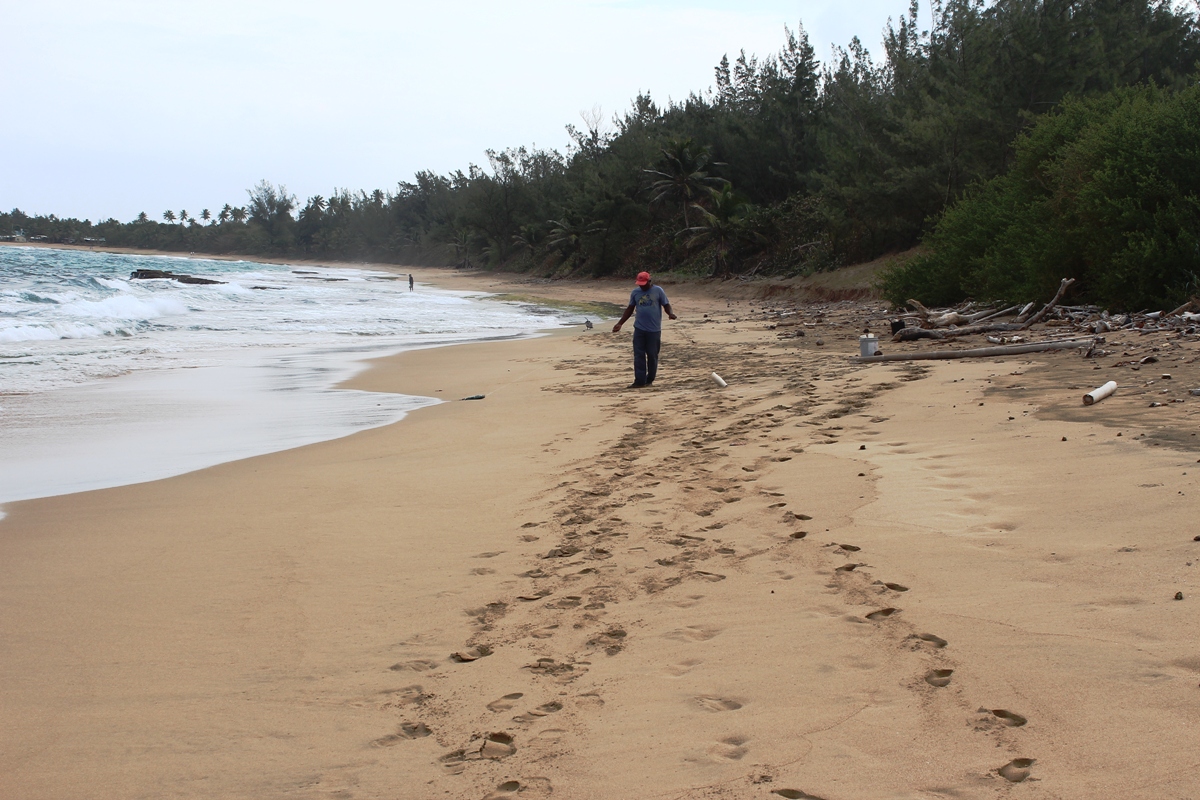 Anyway, rain was in the forecast again, so we headed back after a mile or so. Meanwhile, this fisherman had turned up, plying his craft with just twine and a hook. He was already reeling something in as we approached.

He didn't seem that pleased with himself, but if you ask me, that's a pretty good catch for a dude standing on a beach. 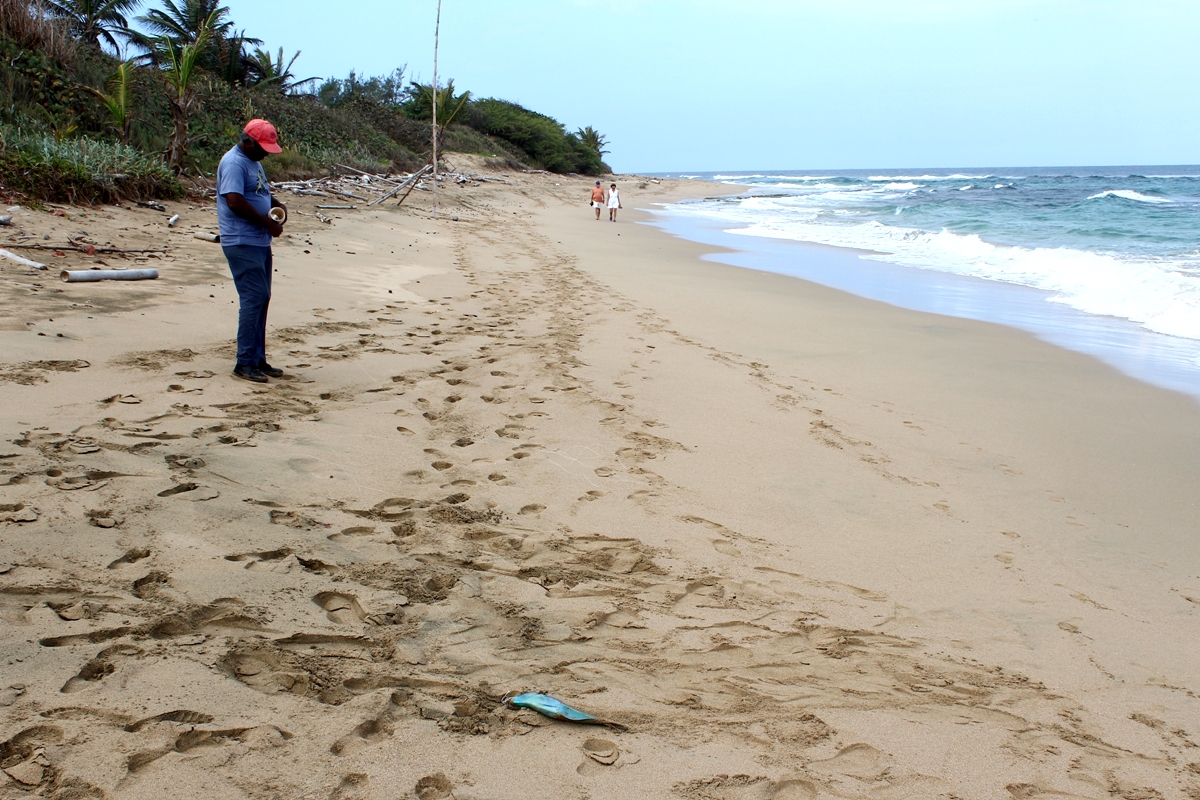 If I were into critiquing beaches, I'd tell you that Puerto Rico's don't necessarily have the soft white sand that the tropics are renowned for. The sand we saw was mostly tan and kind of firm. To be fair, it might be a different story on the Caribbean side of the island; Ponce, where the Mini drive started, is down on that side, but I didn't get a chance to check out any beaches.

Note that Isabela, like San Juan, is on the Atlantic side. 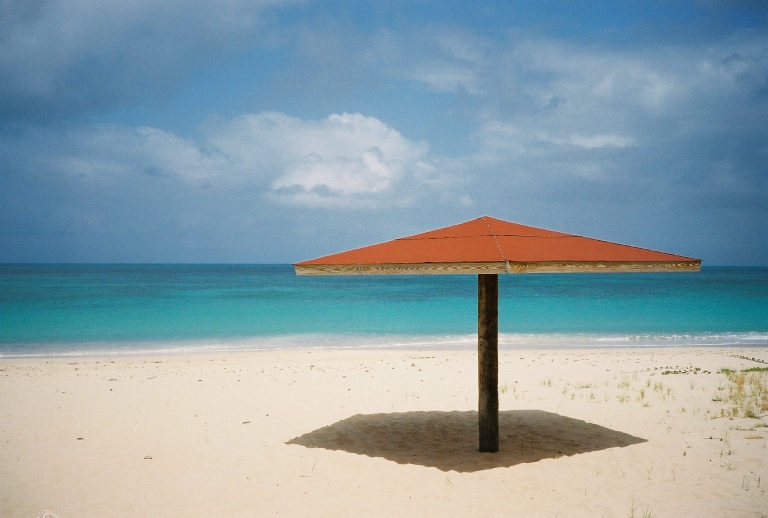 Speaking of white sand and so forth, you can't go wrong with mrs500benz's ancestral homeland of Antigua. I took the photo above with a film camera about ten years ago. That's genuinely what Antigua looks like. 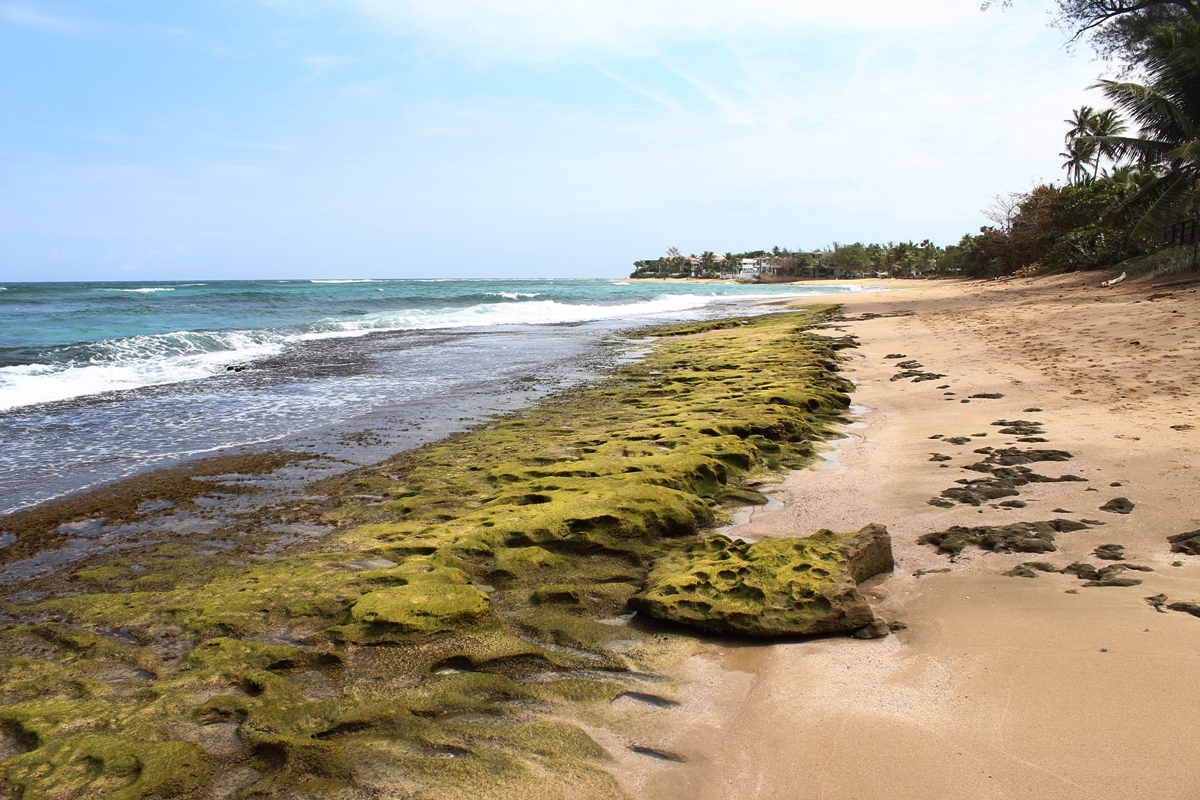 The beach around Villa Tropical also has this crusty stuff protruding from it in places. I like it, but I feel many beach critics would not. 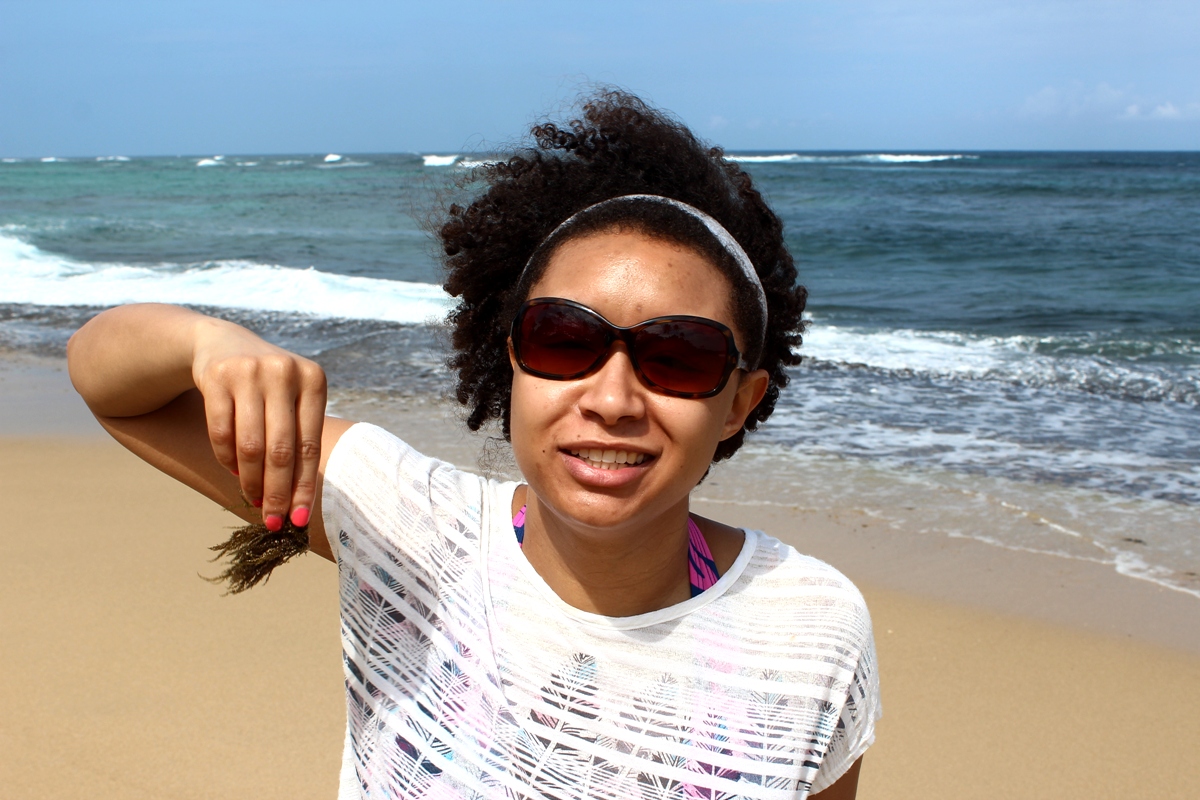 Fortunately, mrs500benz didn't complain, perhaps because she was too busy picking things up and trying to eat them. 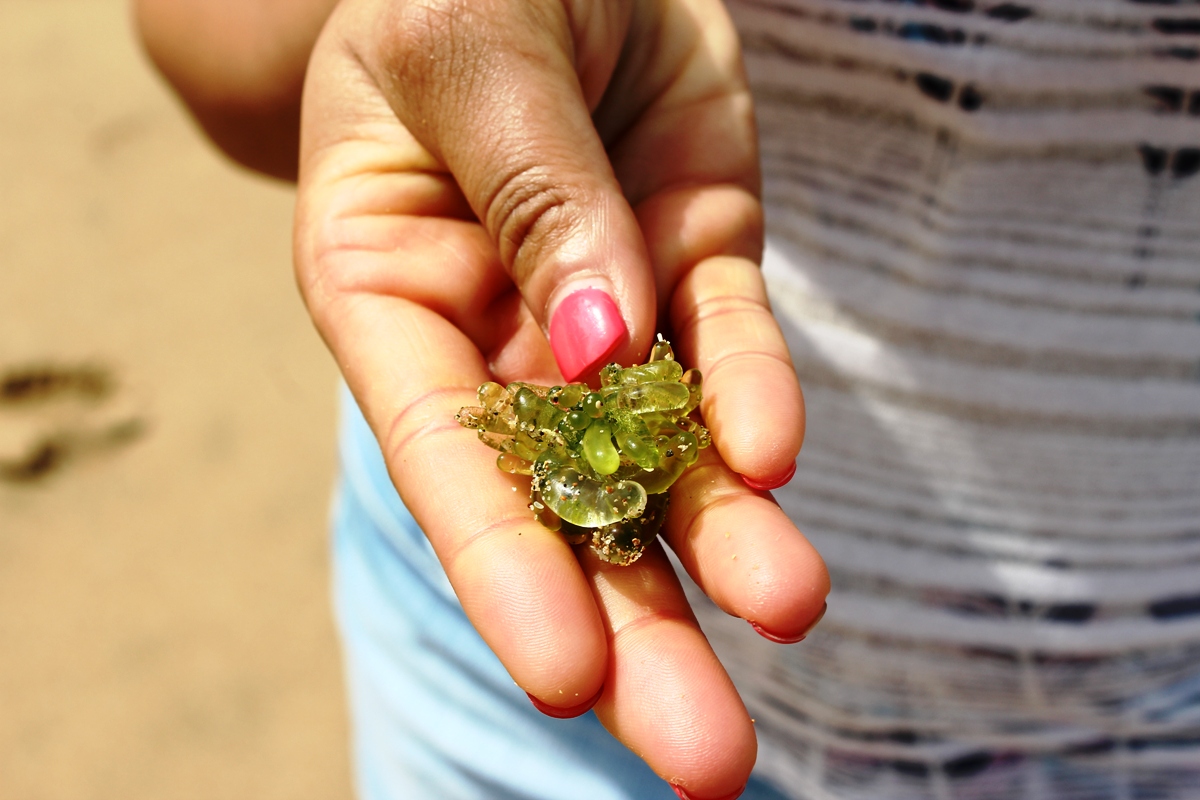 This one did look potentially delicious. I attempt to squeeze the liquid out of it in the video, which you'll get to shortly. 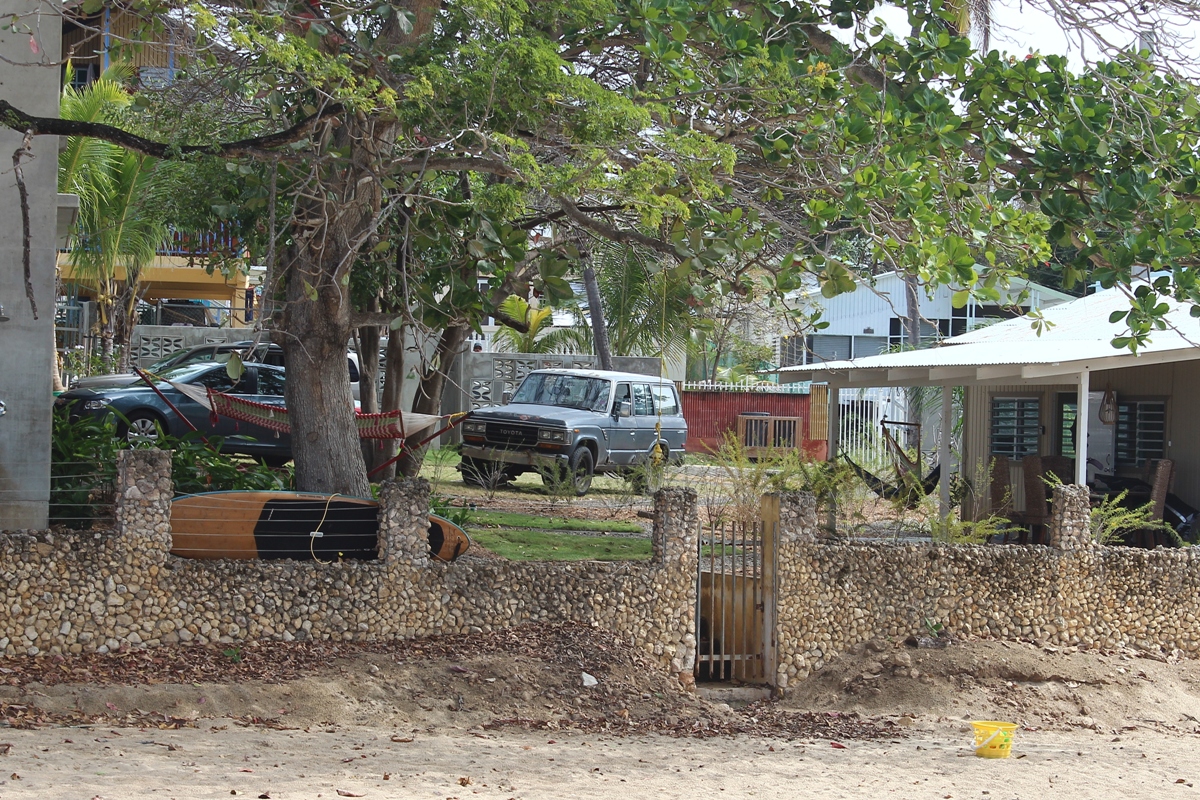 Can you think of a better island car? With all due respect to the 500 Benz, if I lived in Puerto Rico, I would indubitably drive an old Land Cruiser.

Villa Tropical is one of the buildings on the right. We weren't thrilled with our "Front Studio" room, incidentally, but if you get one of the oceanview suites with private balconies (they were all booked for our stay), you're probably going to love this place. Definitely a good way to escape the sunburned San Juan crowds without straying too far from the beaten path.

In case the photos didn't quite do it for you, here's a video. Dunno about you, but I would much rather have a beach day here than on the hyper-developed San Juan coastline. Fun fact: the affable Canadian who runs Villa Tropical told me he once found some manatees to swim with not far from shore.

I hope you clicked that manatee link. Those things are pretty wild.

But overall, it's about time I got back to writing about the 500 Benz, amirite?! Give me one more day of these, and I will thereafter do just that.

Here at 500Benz headquarters, we could not agree more!

Hi. I enjoyed reading these. But now it's time for some new posts!