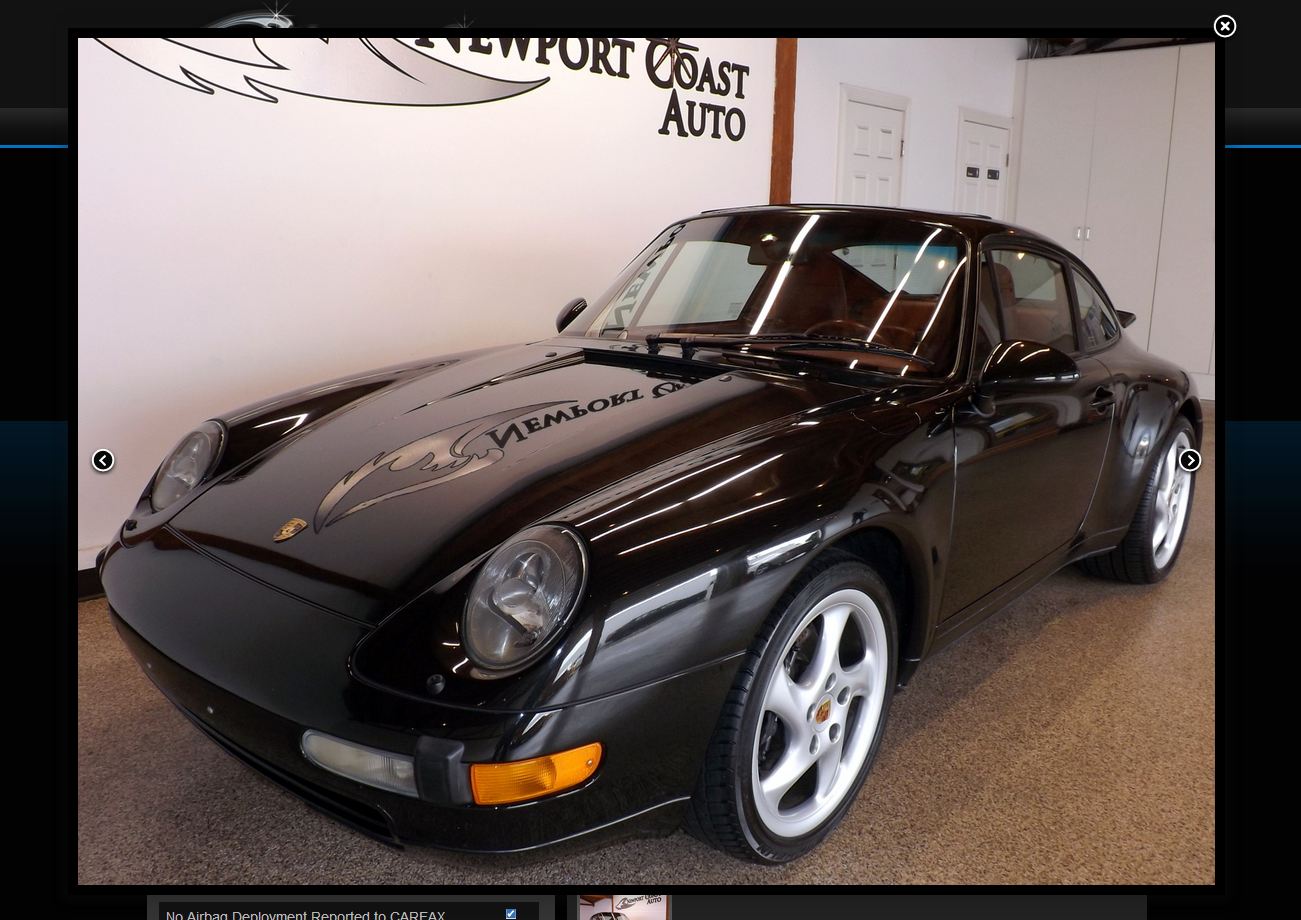 What it is, is a top-of-the-line German luxury/performance car that cost less to buy new than the 500 Benz and is now worth about three times more.

This particular 1997 Porsche 911 is currently for sale at a specialty used-car dealership in Newport Beach. Check the odometer: 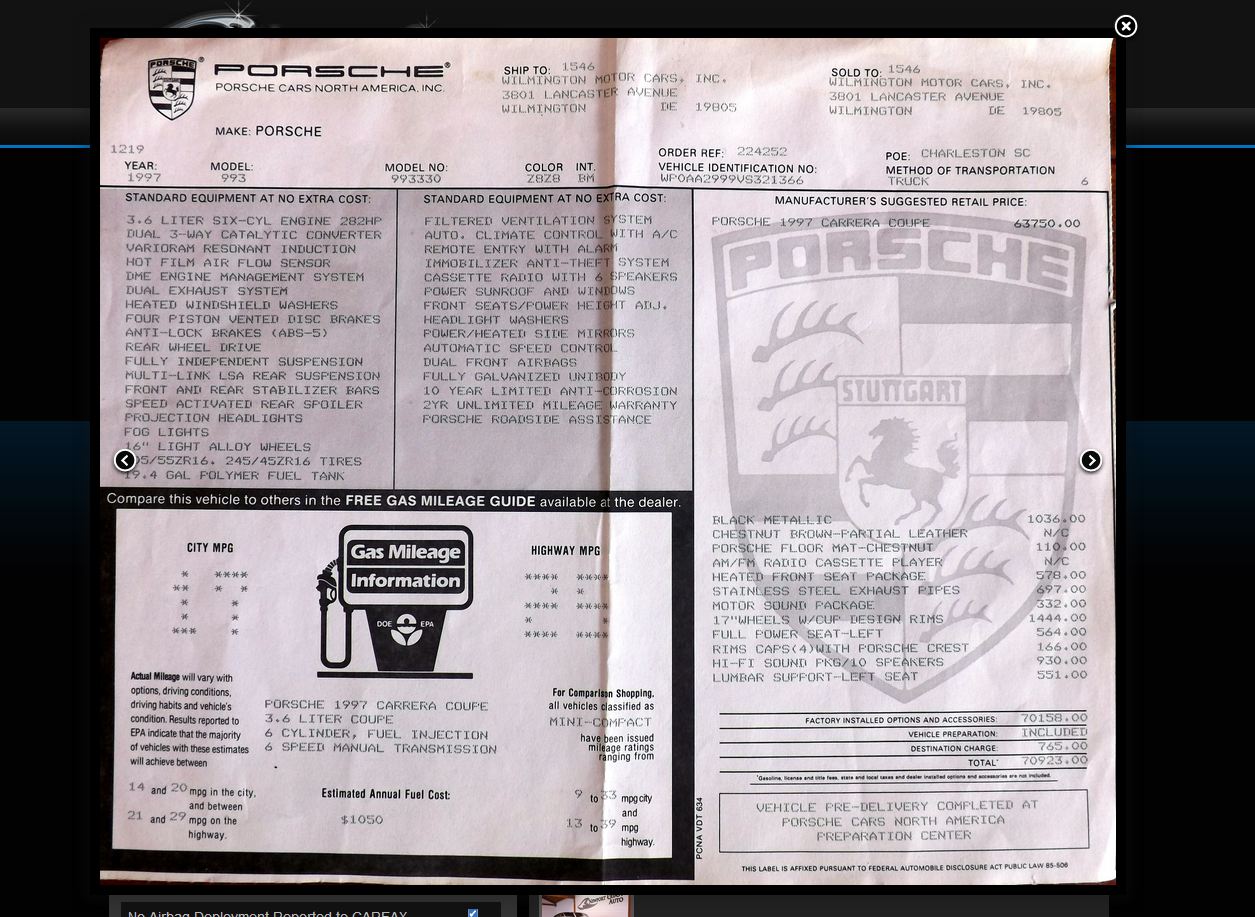 Meanwhile, Mercedes was selling the SL500 for considerably more: 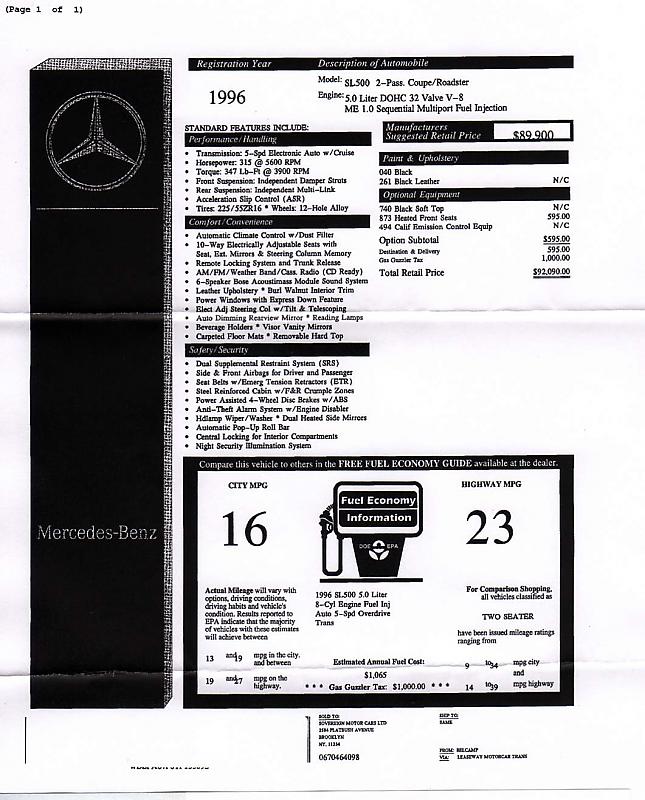 Mine didn't come with a Monroney, but this '96 SL500 is basically the same car (I've got a few little extras like an updated climate-control unit). Interestingly, Mercedes cut the SL500's price by $10,000 for 1998 to spur sales, but the car's content didn't change.

So what's my point? Well, like anyone with a pulse, I love the 993 and fully intend to own one when I'm rich and idle someday. But it blows my mind that the asking price for this 993 is the following... 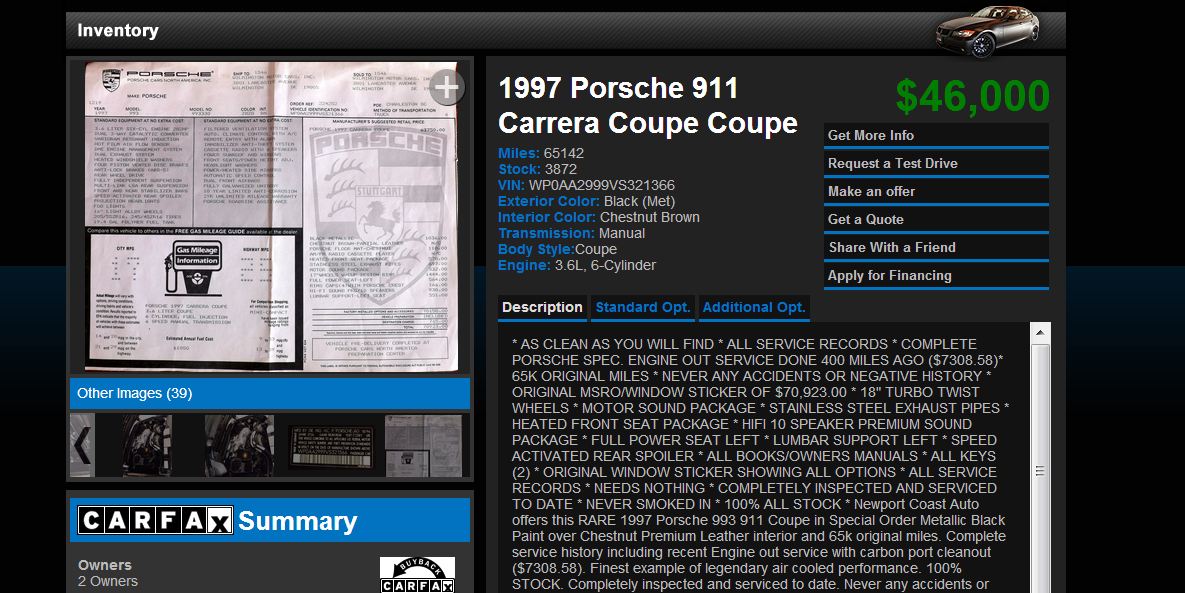 Let's do a little comparison, shall we?

Brand Image. You can't tell me that Porsche and Mercedes aren't in the same league in this regard. Outside of Italy, these are arguably the two most storied brands in autodom. I'm calling this one a tie.

Driving Dynamics. The 993 is a tiny sports car (it's classified on the Monroney as a "mini-compact") with a short wheelbase and an obscenely wide ass that contains an engine. Twenty—twenty—inches longer stem to stern, the 500 Benz is a grand-touring roadster that keeps its engine up front where it belongs. About the only ride-and-handling trait these cars have in common is epic high-speed stability. I don't think it's possible to score this one, so let's just move on. 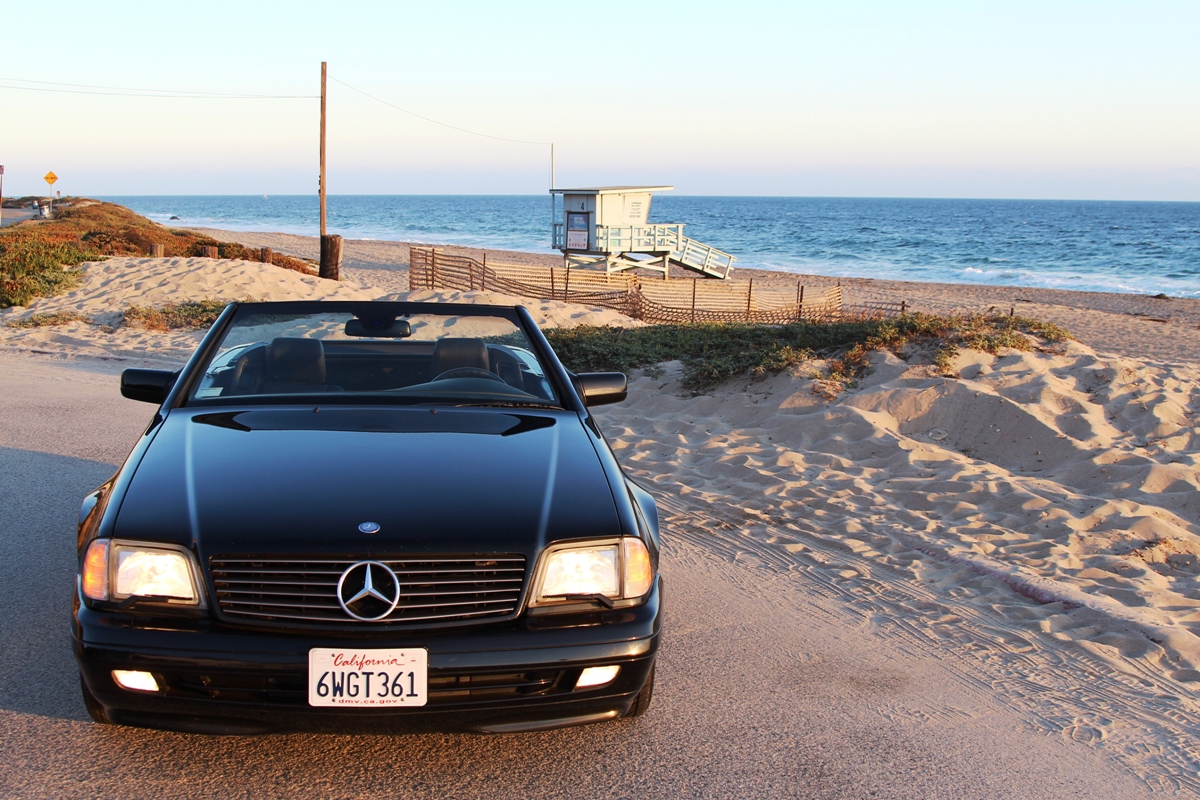 Styling. Bit of a mismatch here, as the 993 is possibly the most beautiful car I've ever seen, but again, I think the Benz's talents are underappreciated. To me, the R129 SL's simple lines embody the no-nonsense philosophy that prevailed at Mercedes until the 2000s. Here was a car that didn't need gills or frills to feel secure; rather, it defiantly rejected such flourishes, as if they were beneath a car of its stature. I think there's something timelessly cool about that. So while the Porsche takes this category, too, the 500 Benz brings enough to the table to be competitive. 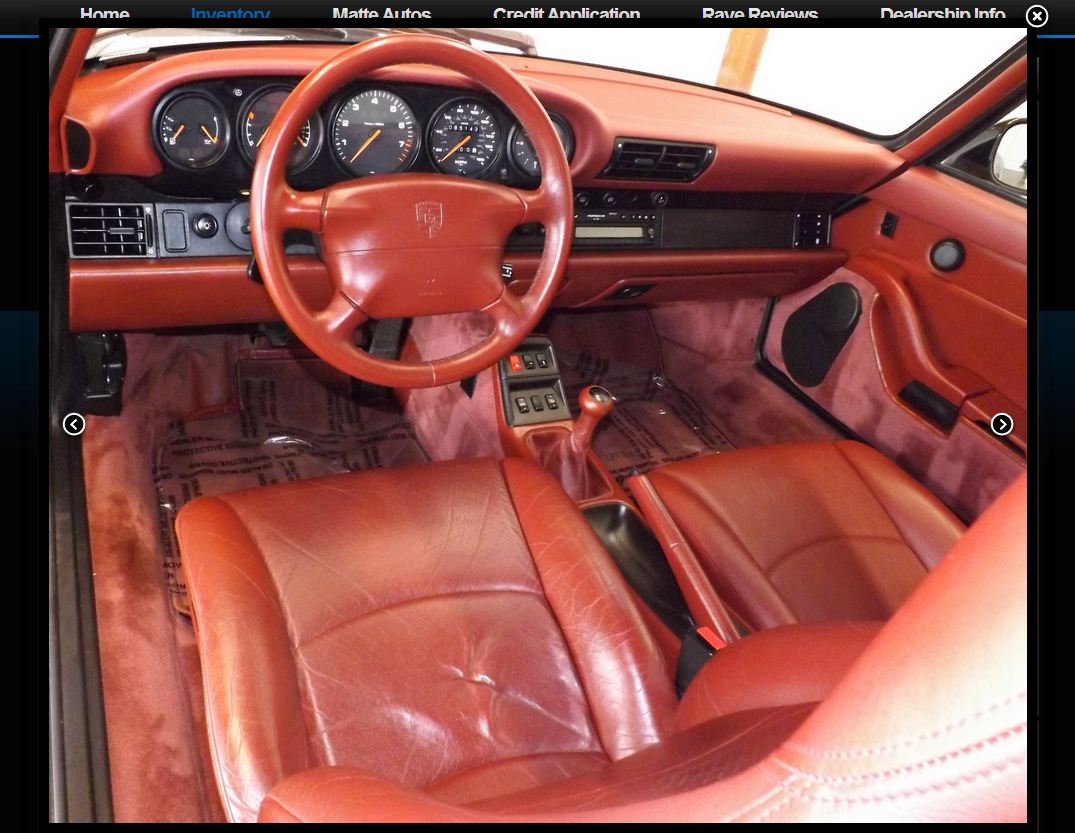 Interior Evaluation. Both cars use top-notch materials inside, which explains why their innards age so well (although this 993 shows more seat wear than my car). And both put form after function. I personally prefer the Mercedes for its snugger, more intimate layout—note how the center console rises higher between the seats, and the controls on the dash are closer: 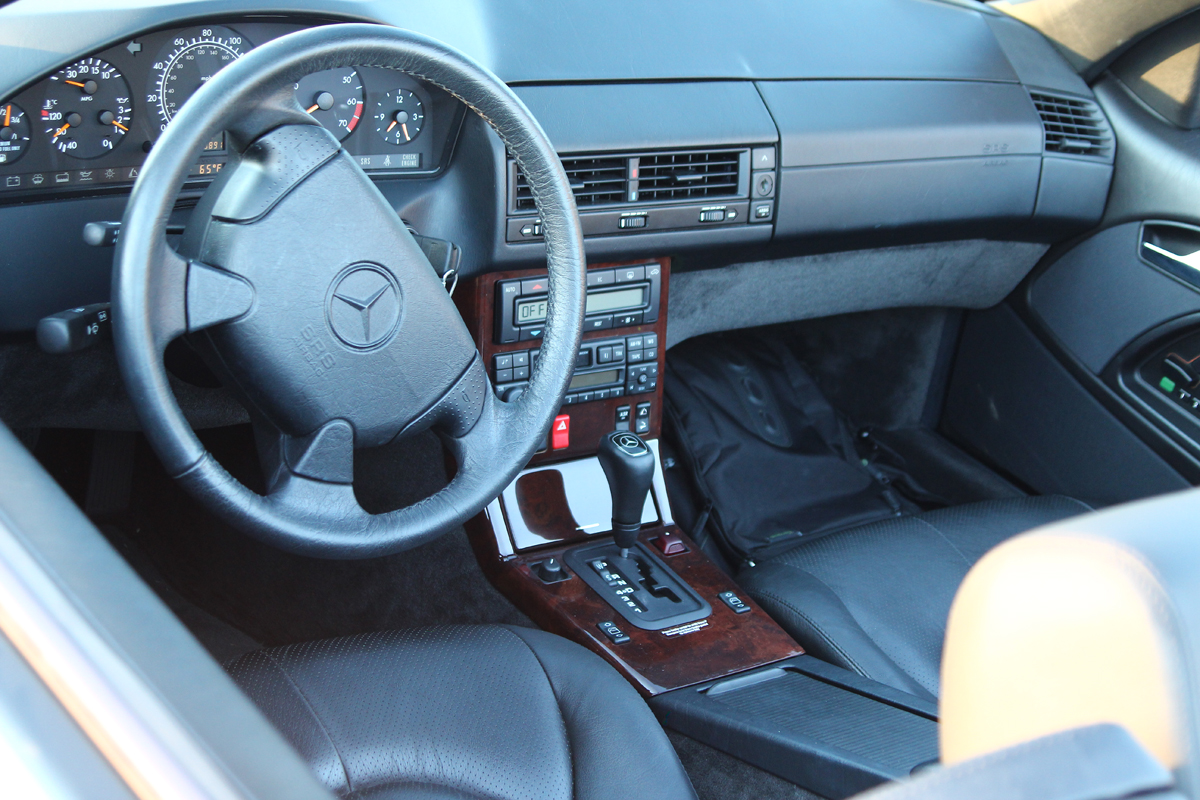 But at the end of the day, they're both cost-no-object cabins from the two German companies that really cared about this sort of thing in the 1990s. Too close to call.

THE VERDICT. There's no question that the 993 has a perfect-storm combination from a collector's standpoint: it's the last of the air-cooled 911s, and it's flat-out gorgeous. Its successor, the 996, presents an illuminating contrast: water-cooled and aesthetically awkward, it'll barely fetch half the price of a comparable 993. So we can all agree that there's something special about this 911.

But why isn't the same true of the R129 SL500? Through 1998, it was powered by an epic DOHC 32-valve V8, just like the Porsche 928, I might add. It's the only SL that combines modern performance and features with classically austere Benz styling. It's from a time when Mercedes took longer than just about any other automaker to build a car, and you can feel that dedication in the end result.

Given the $30,000-plus price difference, the verdict is clear: the Porsche loses in a landslide.

Now would probably be a good time to mention that the upcoming Comparison Test feature's scoring system will have a "Pounds Per Inch (Length)" tally that's worth 25% of the overall score. M-B did a historic job of stuffing mass into the 500 Benz, and I want to salute this achievement.

Also, did you just compare the 500 Benz to Megan Fox? Actually I think I can live with that. Although I'd argue that the Benz's hand-built V8 is every bit a "unique piece of machinery."

The 500? Dilution… plain and simple. Count the cars—roadsters, sports cars, across manufactures and within each lineup—that have their engines up front, cooled by water. Don’t get me wrong; I love the 500 for my own reasons. But it’s futile to think we can compare the two. One is interesting and not like anything before nor after. The other is carbon, stenciled from designs originally drafted before and reused since. If you couldn’t afford the 500, you’d get a Mustang convertible, or a Sebring or a Miata. Can’t afford the 993 (then or now)? Keep saving.

You can copy and improve—even subjectively perfect—a tried-and-true design; but the 993 was just so perfectly wrong.

You can’t argue the merits of the better car using opinion as the metric! Ask the 80s Accord driver that raided the cool-guy aisle at Pep Boys—exhaust tips should be 5 inches, mahn. Less backpressure, yo.

You can only attempt to explain what the market has already decided: The 993 is worth at least three times the 5-double-oh. Why? It’s intangible! It can’t really be neatly explained! It’s got the “it” factor. It’s why Emma Stone graces covers, leads Silver Screen roles and gets better with time, and why Megan Fox was once desired by all but now the only thing interesting about her is that fading Marilyn tattoo.

The 993 is such a unique piece of machinery, in part, for the reasons you seem to discount: It’s smaller than the 500—in size and weight—and its engine is where it shouldn’t be. And that engine! That thing keeps engine temperatures in check with God’s coolant. God.